As usual, these images are larger than what is displayed in your browser. To see more detail, drag them to your desktop.

In addition to making the cutouts for the side and bottom weapons bays, and adding their panels, I've added other various new panels toward the nose, and also around the aft section near the engine exhausts. I've also set up some polygonal selection sets within MODO, so that when I show the aircraft as it's seen here, in it's factory "primer" colors, the beveled panel edges are a reddish-brown. This helps me to compare my work with Lockheed Martin factory photos, but can easily be switched off to show the aircraft in it's overall gray color. Just a few more panels to go, and then I can start on the internal parts. 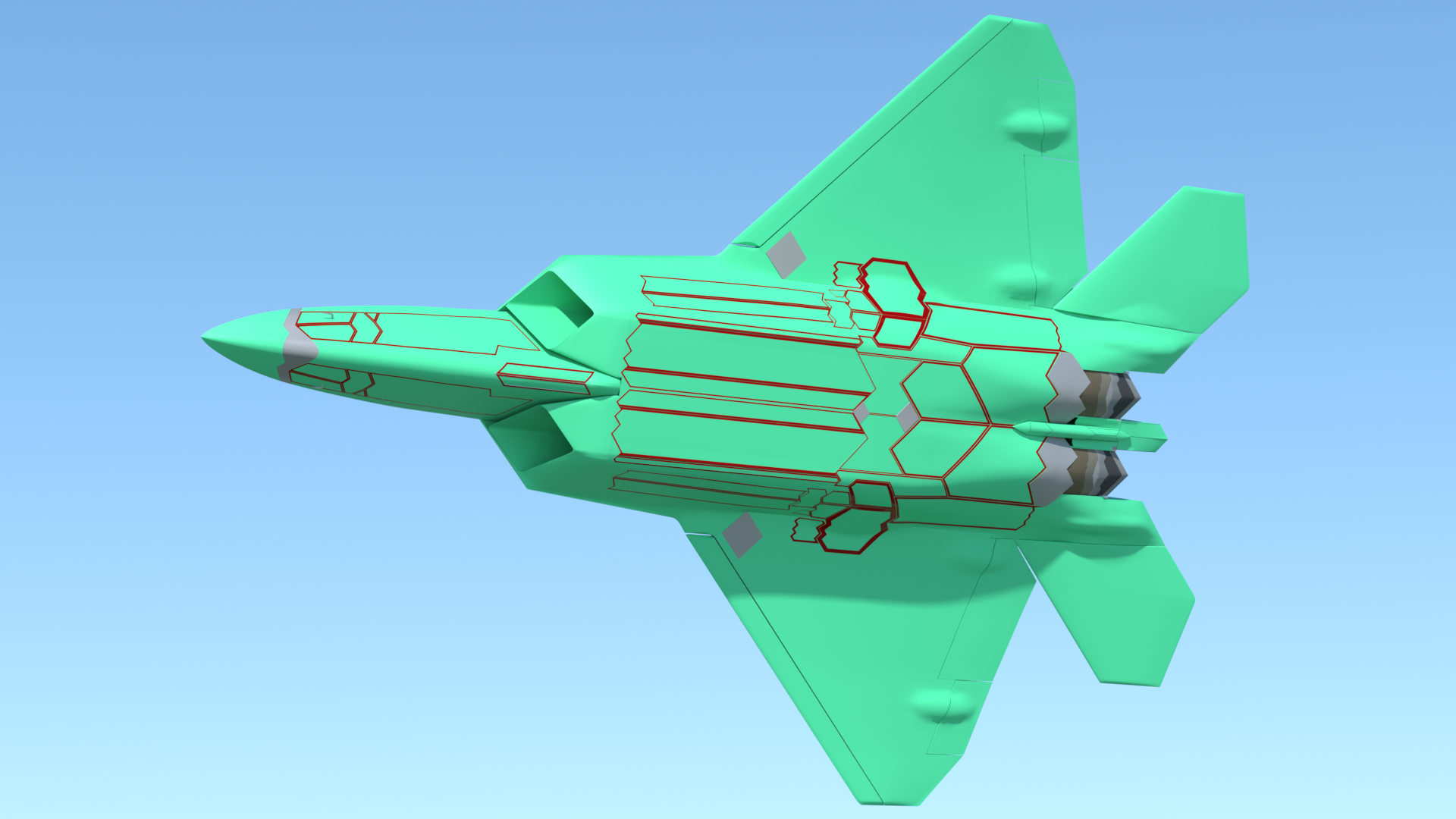 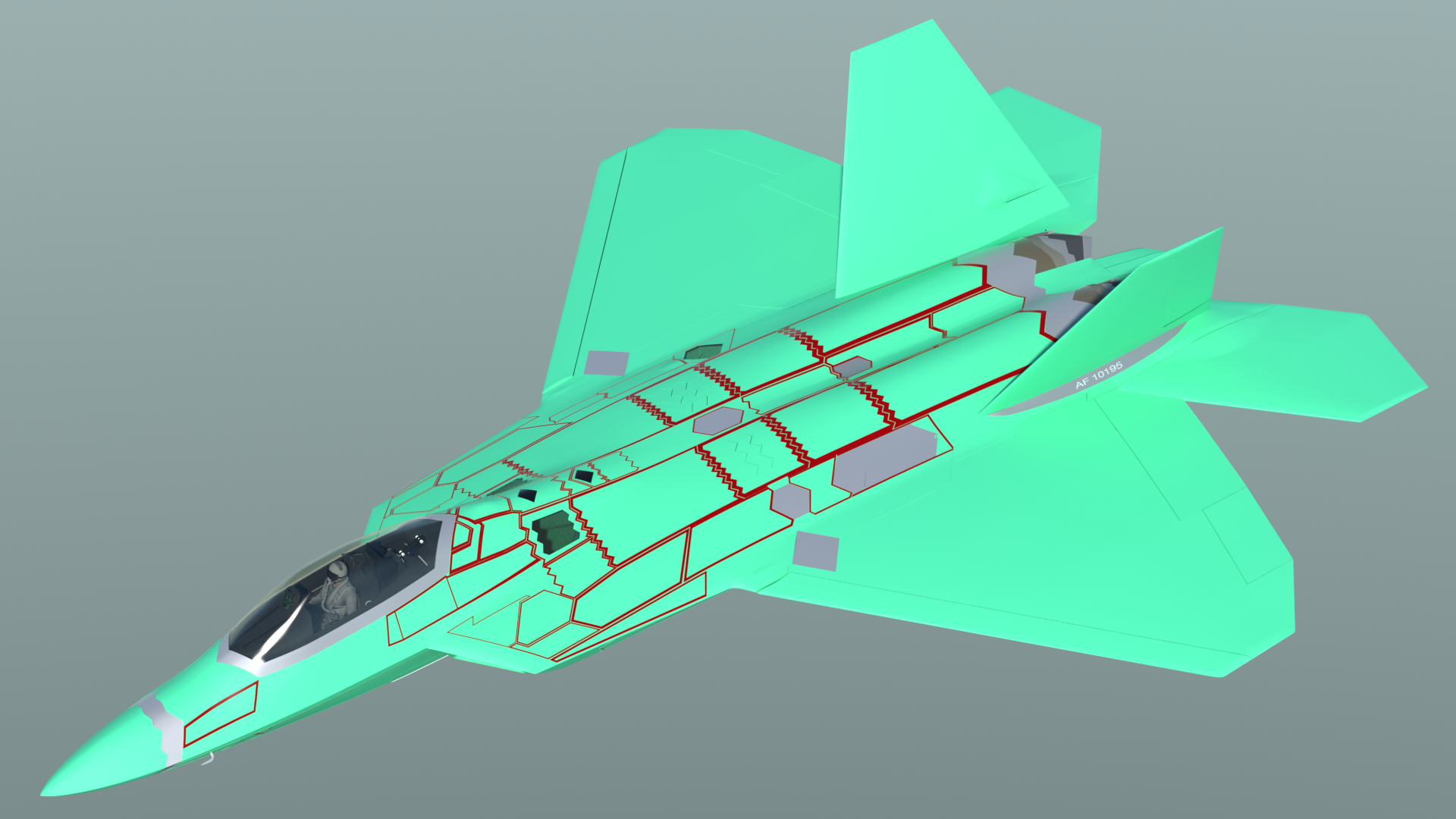 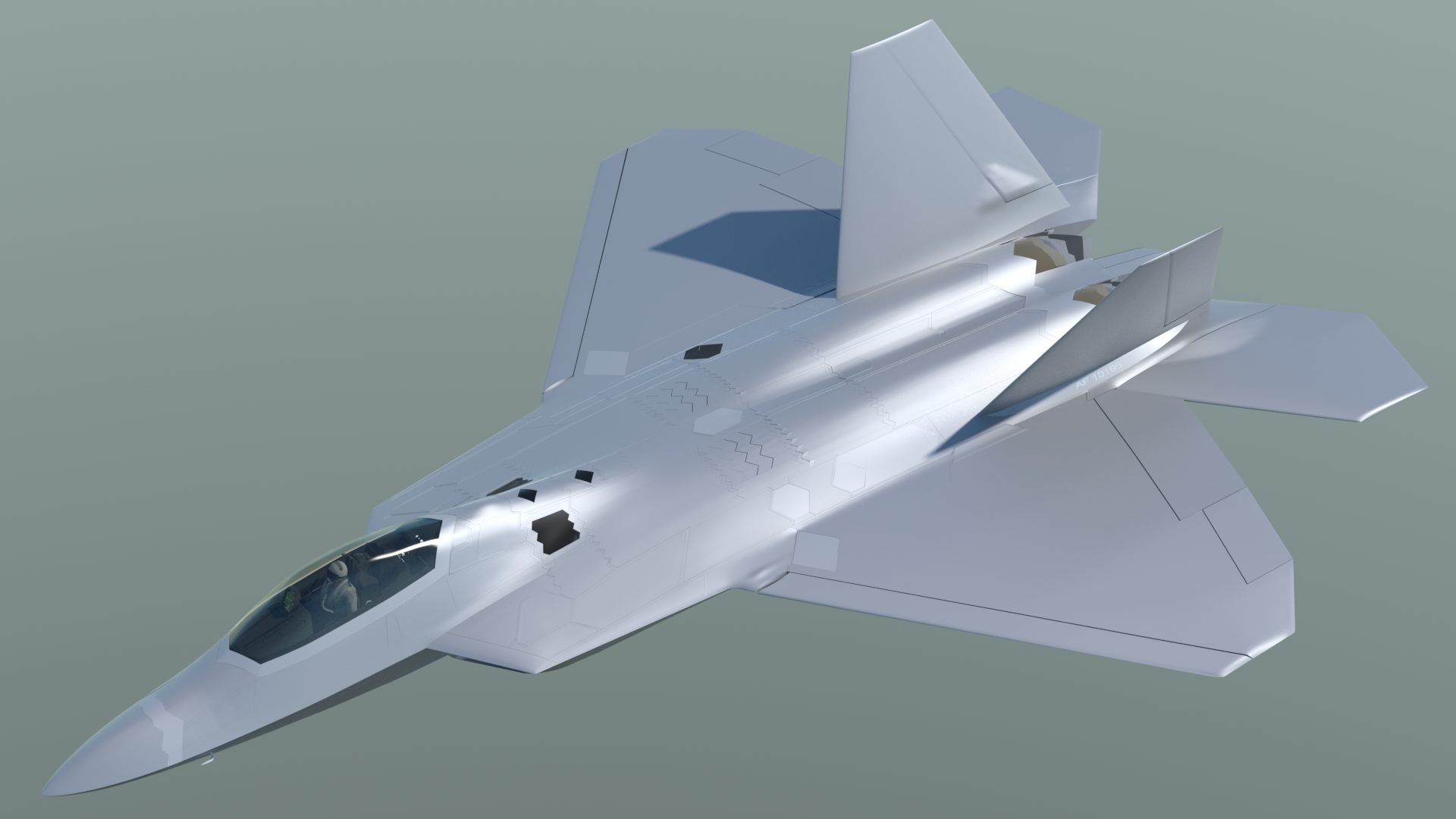 As I build additional parts, some of these panels will surely change, and others will be added. But, the major ones are in place, and I'm nearly ready to start on the internal structures, which will be a huge challenge, but a lot of fun. Here's where the model stands as of 02-15-15. You can see how the "factory" colors really help during the modeling phase, to make all the panels more obvious. 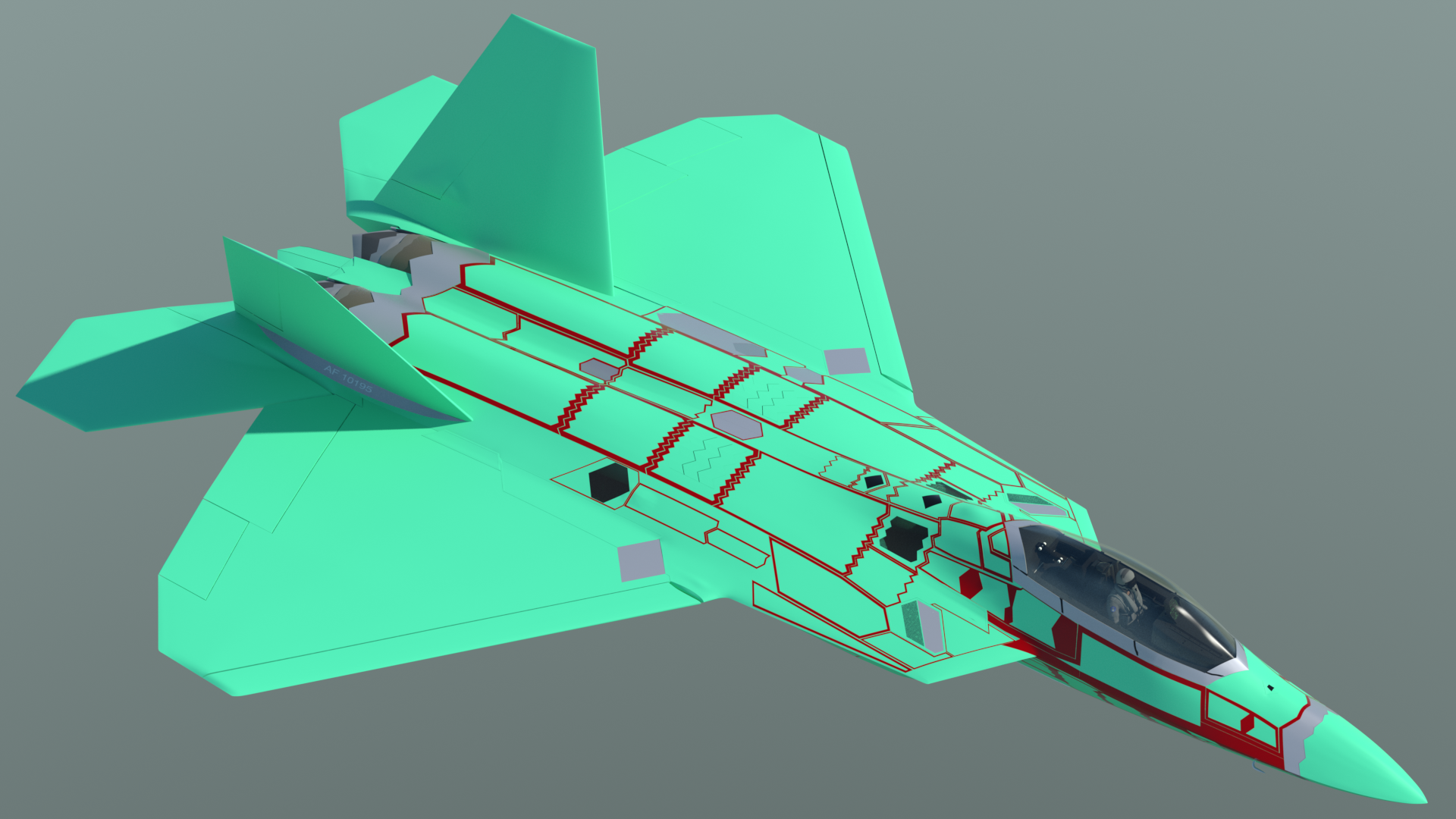 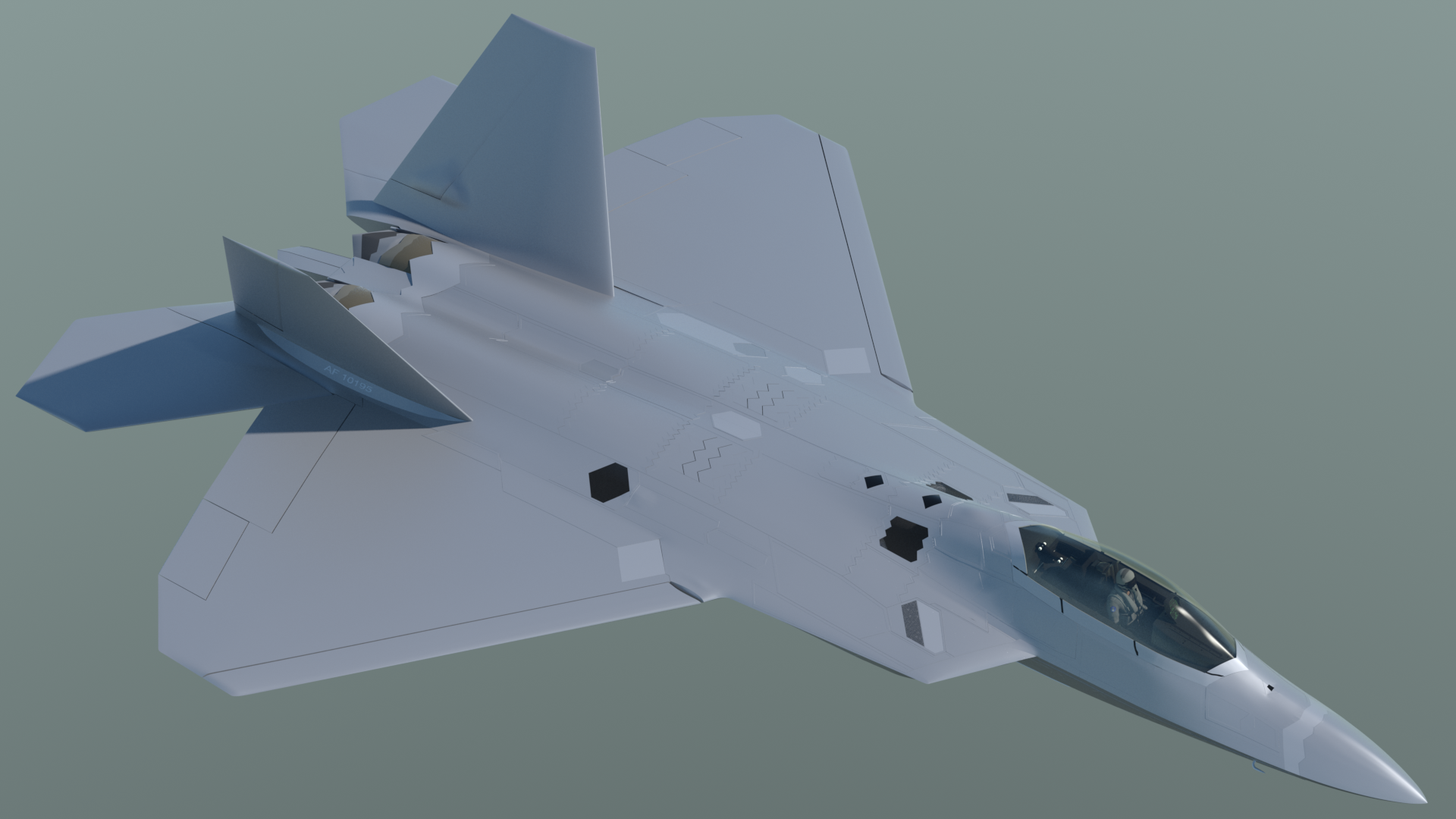 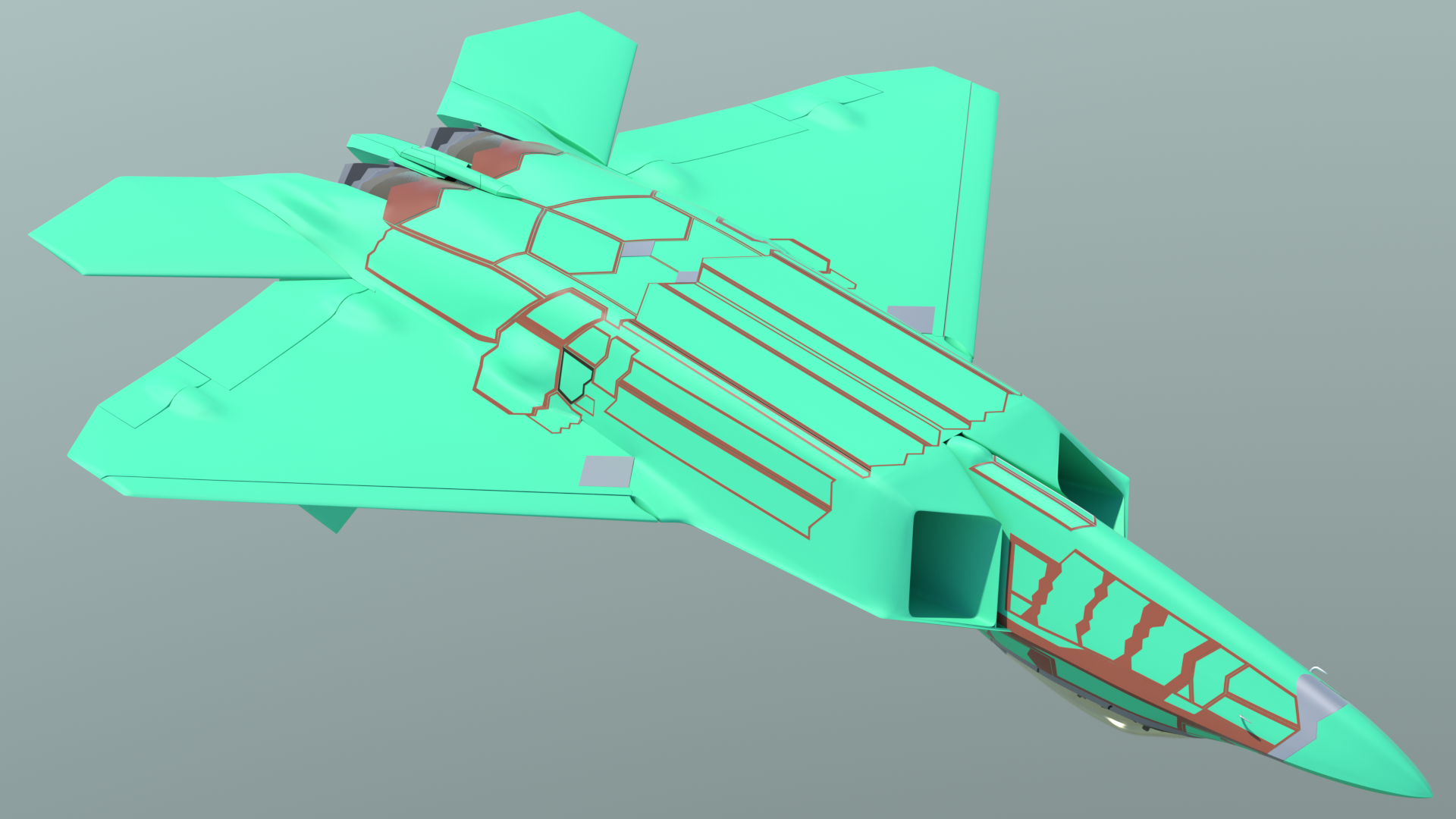 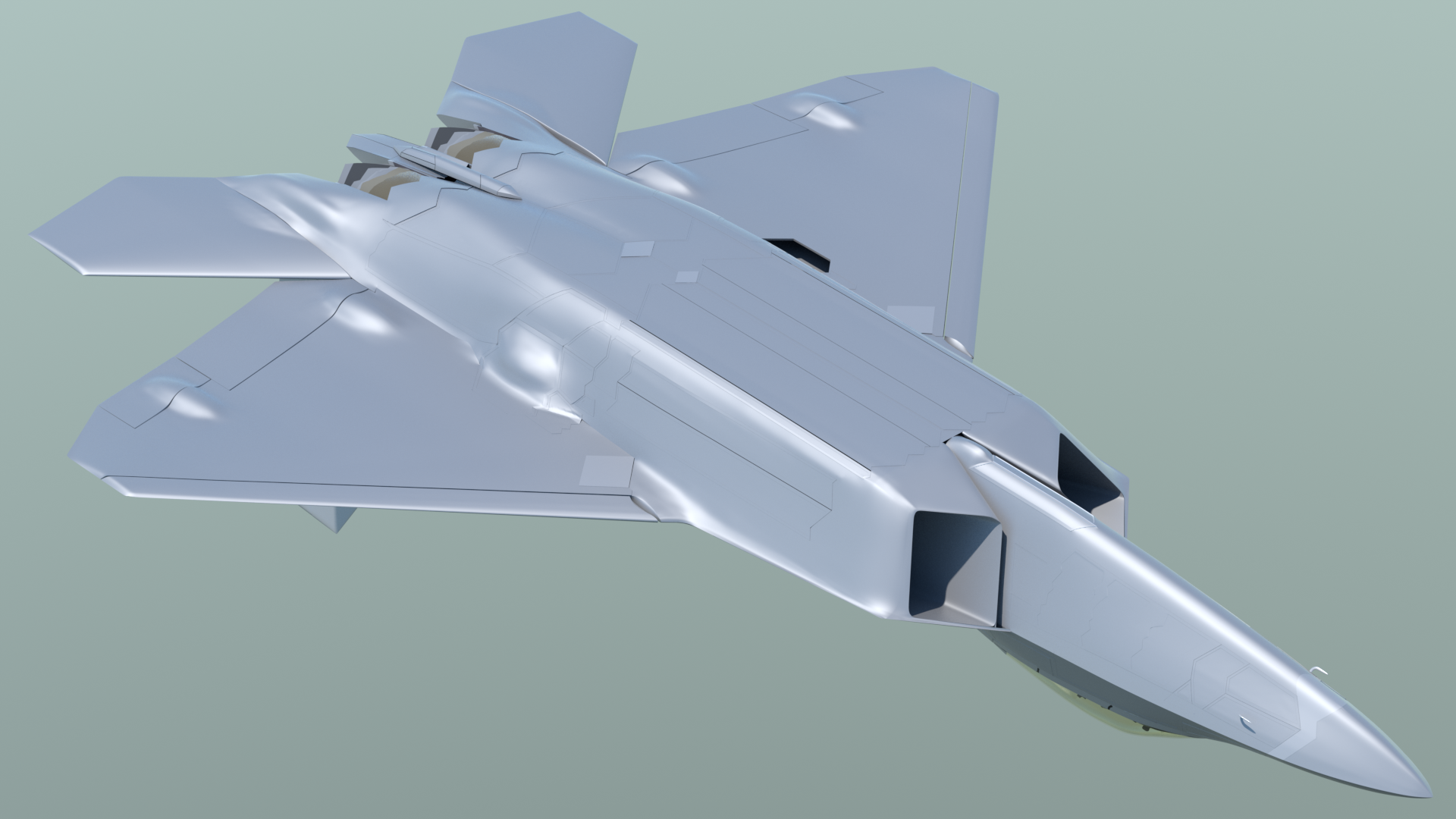 A brief look at the airframe, and a little "zoom climb"...

Click here to see a turntable-style animation of the airframe, followed by a brief "flyby/zoom climb" test animation, using an imported sIBL environment.

Many of the panels I've applied will be removable, or animated in the final model. So, for those panels, the underlying skin had to be removed from the fuselage. Using the same sort of edge-weighting, it's holding up quite nicely. 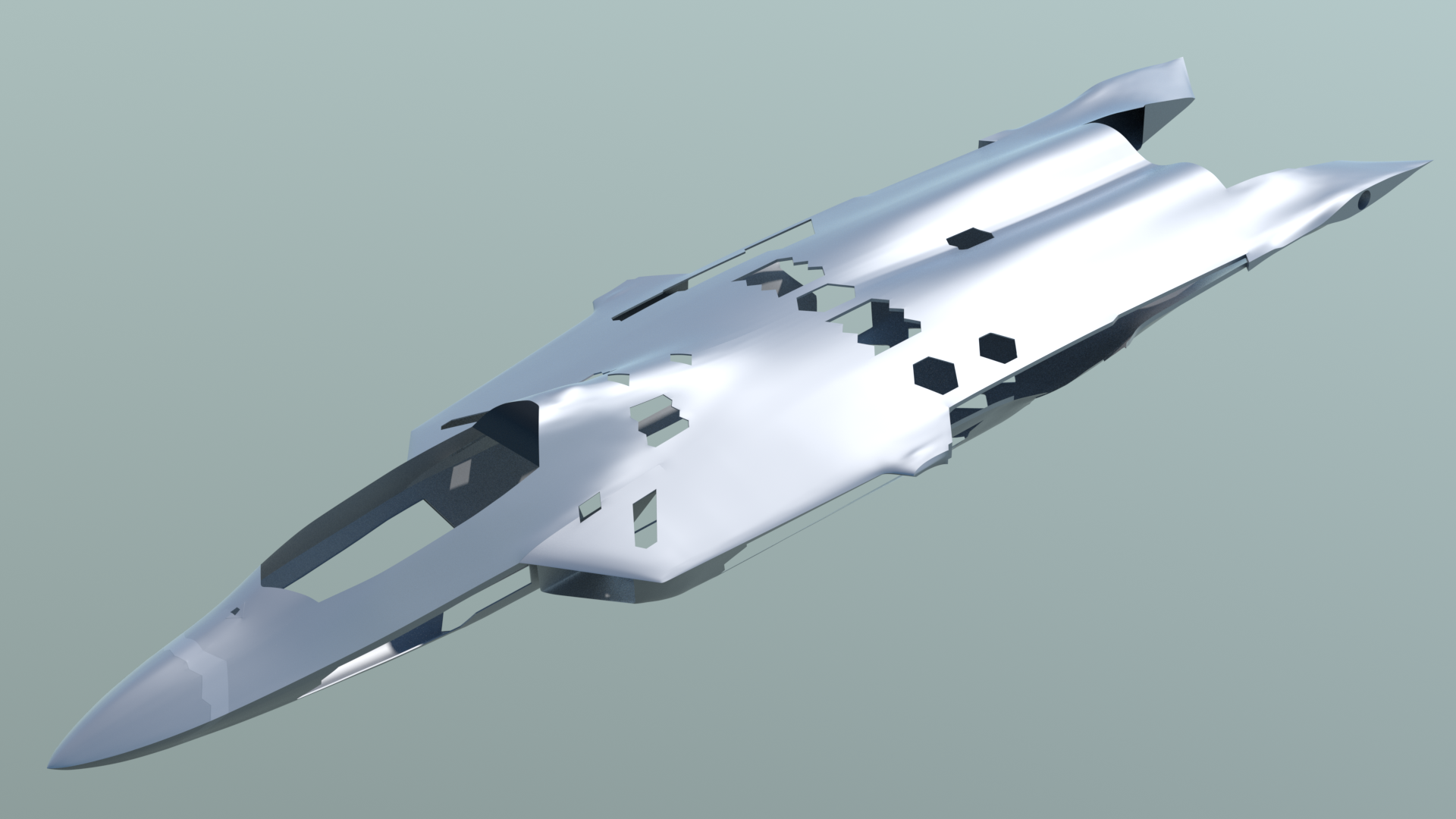 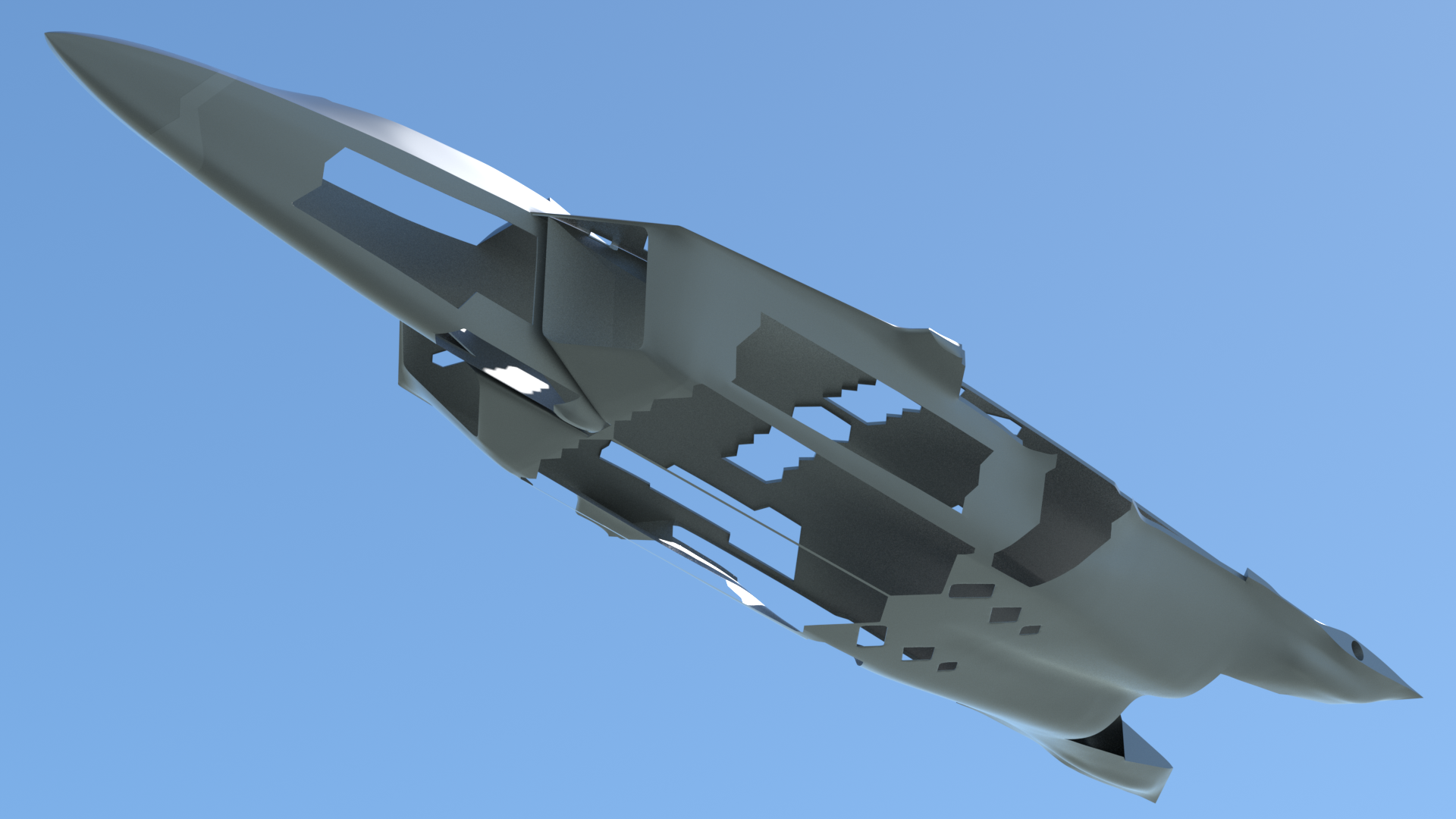 The Base model is nearly ready.

Having spent a couple of weeks tweaking small details on the fuselage, I'm nearly ready to start work on the interior. These refinements include construction of the nearly-invisible area between the intakes and the fuselage, (boundary layer diverter spill duct) some small details including some tiny bulges, on the canopy frame, the shape of the landing gear door bulges, addition of the wing position lights, and the tweaking of many of the stealth panel edges.

Soon, it's on to the interior, which will be both challenging and fun. 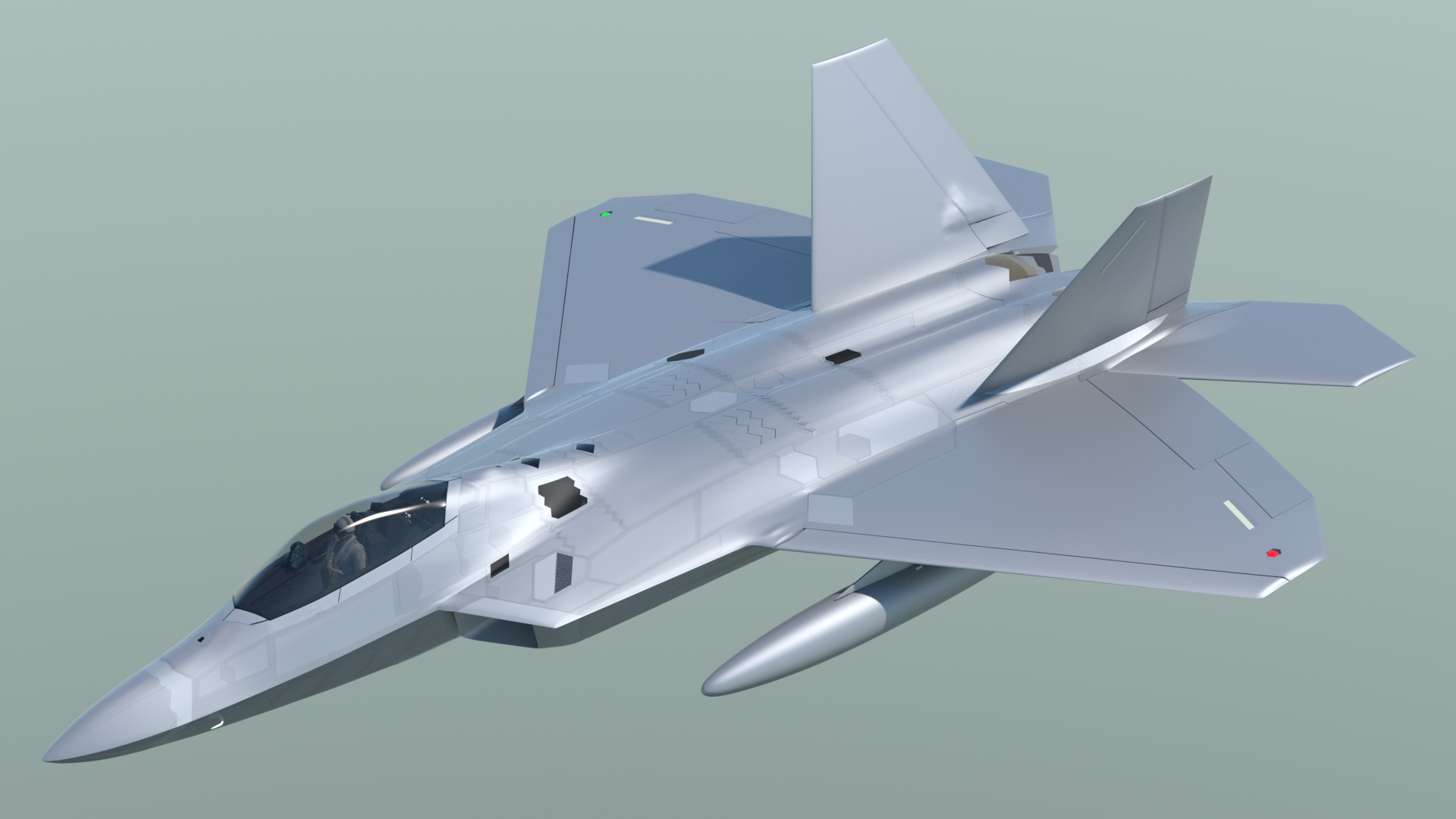 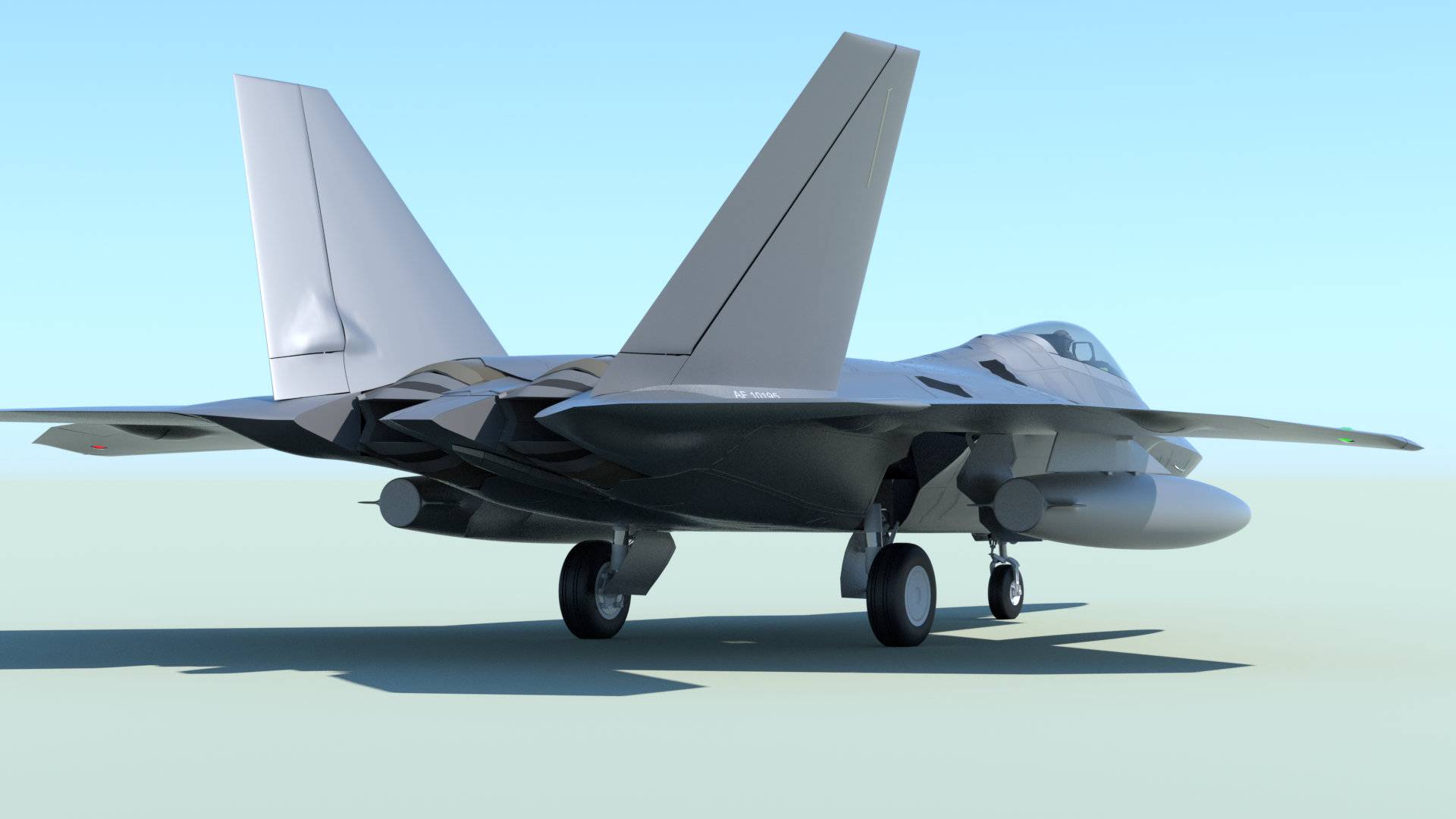 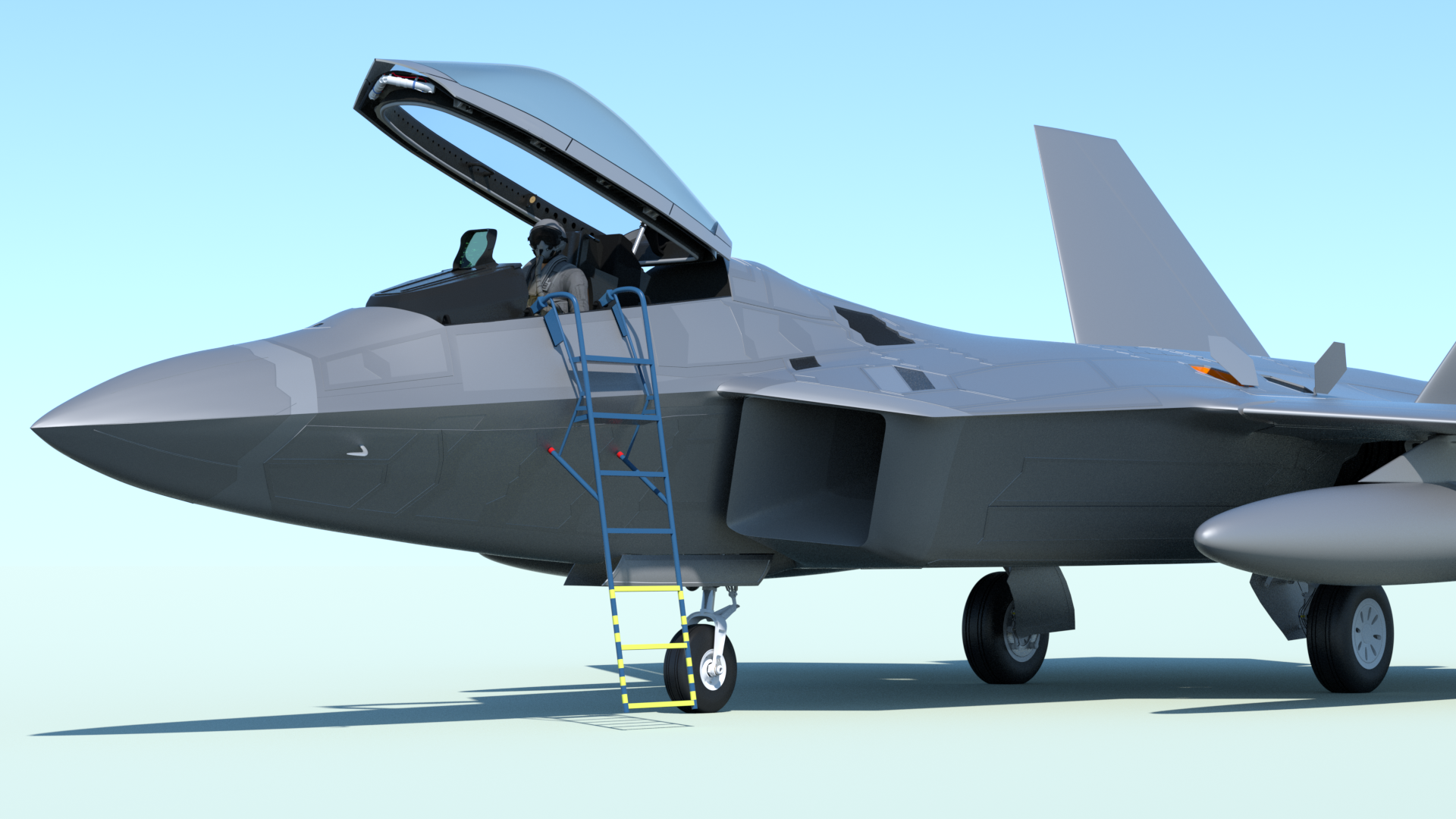 I placed the word "final" in quotes above, because there is always some minor tweaking that goes on, as this kind of a model progresses. But, I'm pretty happy with the current state of the model, and in particular, the exterior shape is close enough to final for me to start with the building of the interior.

The next two renders give you a clear view of how many exterior panels I've added, with the fuselage turned off. As you can see here, nearly the entire exterior skin has been covered. 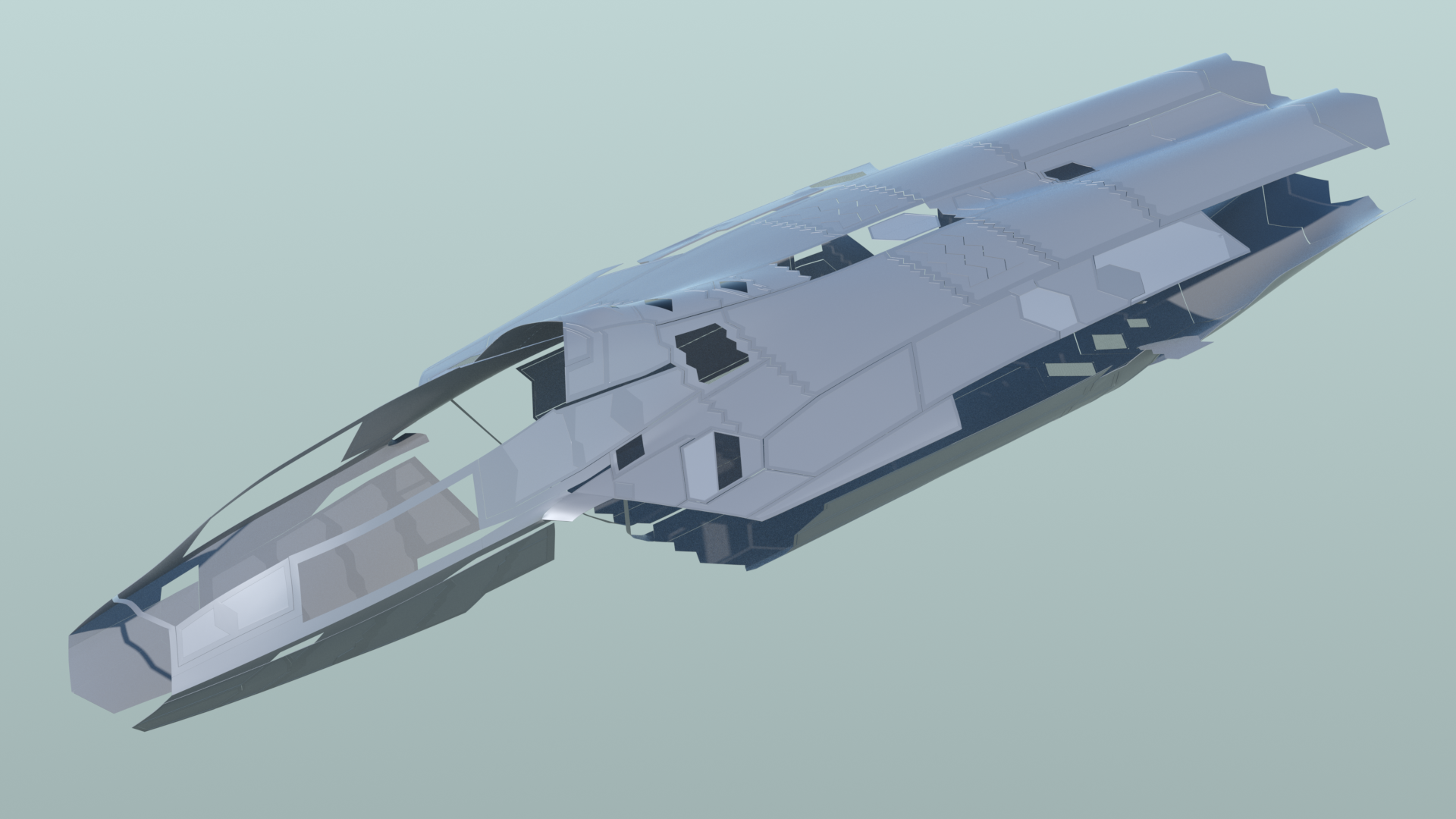 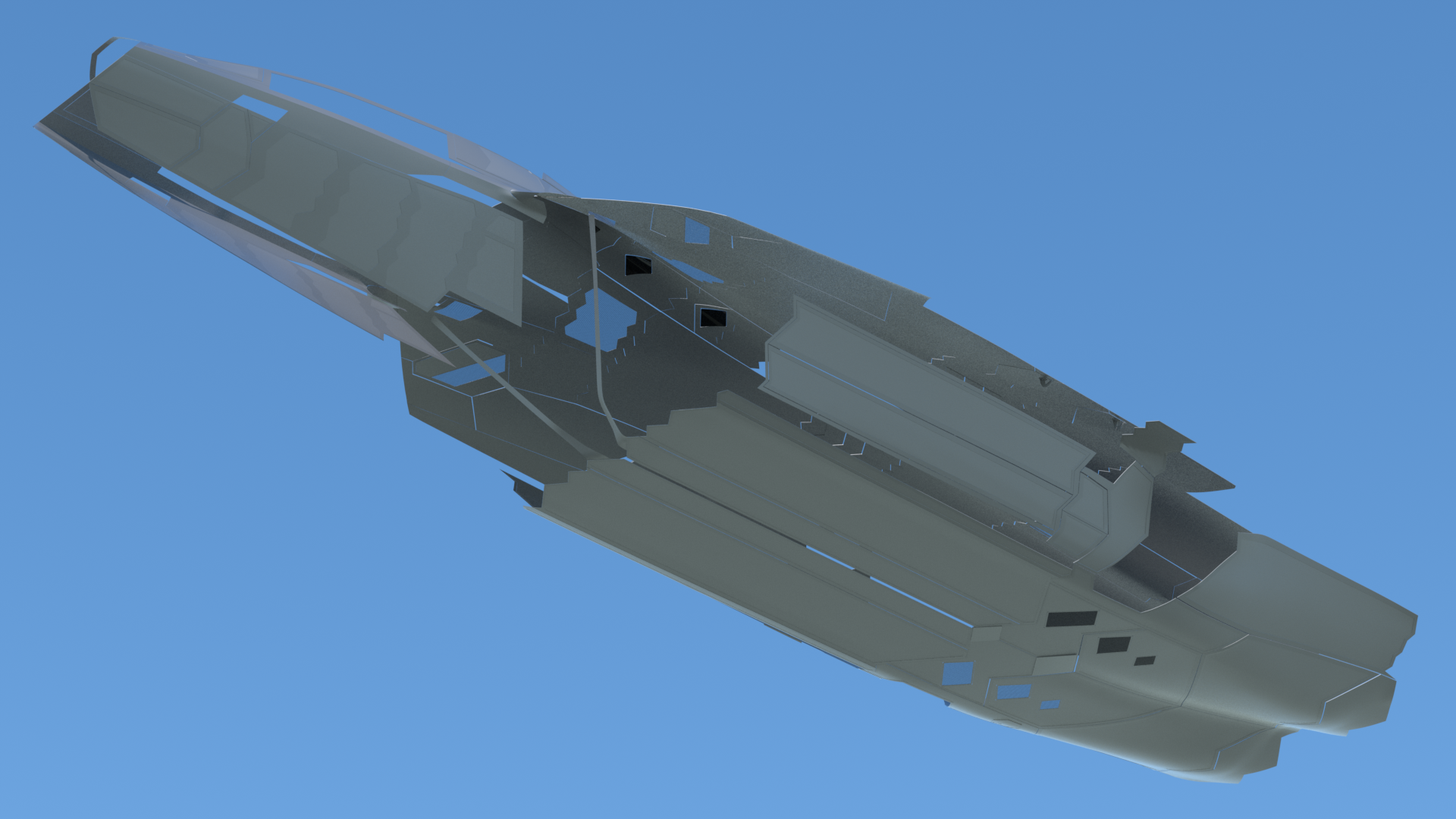 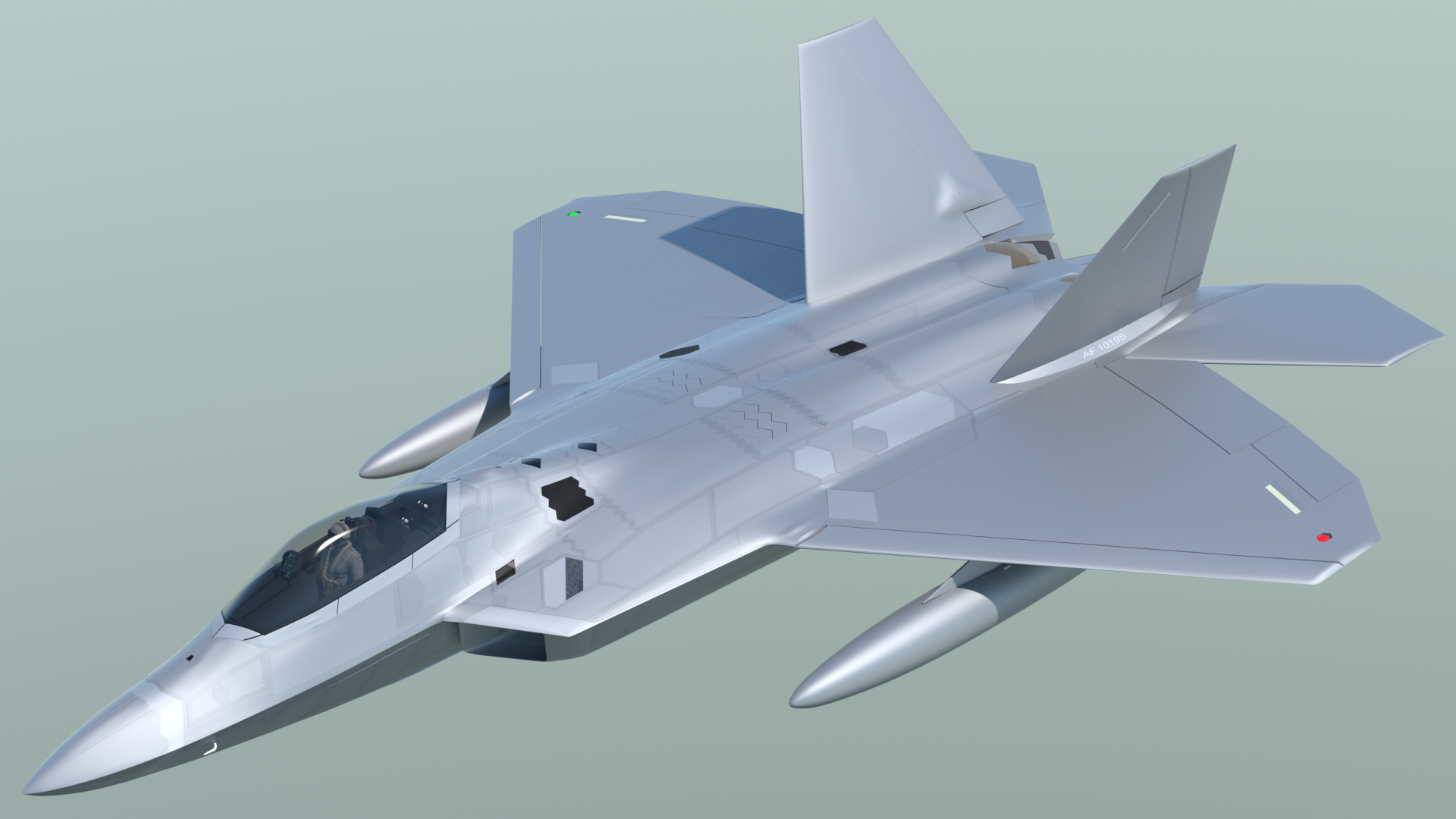 I've also kept the ability to switch the model to it's factory paint scheme, (thanks to MODO's polygonal selection sets) which sometimes provides more clarity for editing details. Like any 3D modeler, I enjoy producing occasional renders during the process, so the other advantage of this pre-textured version of the model is that I can do realistic renders, regardless. I've included a few of those, below. 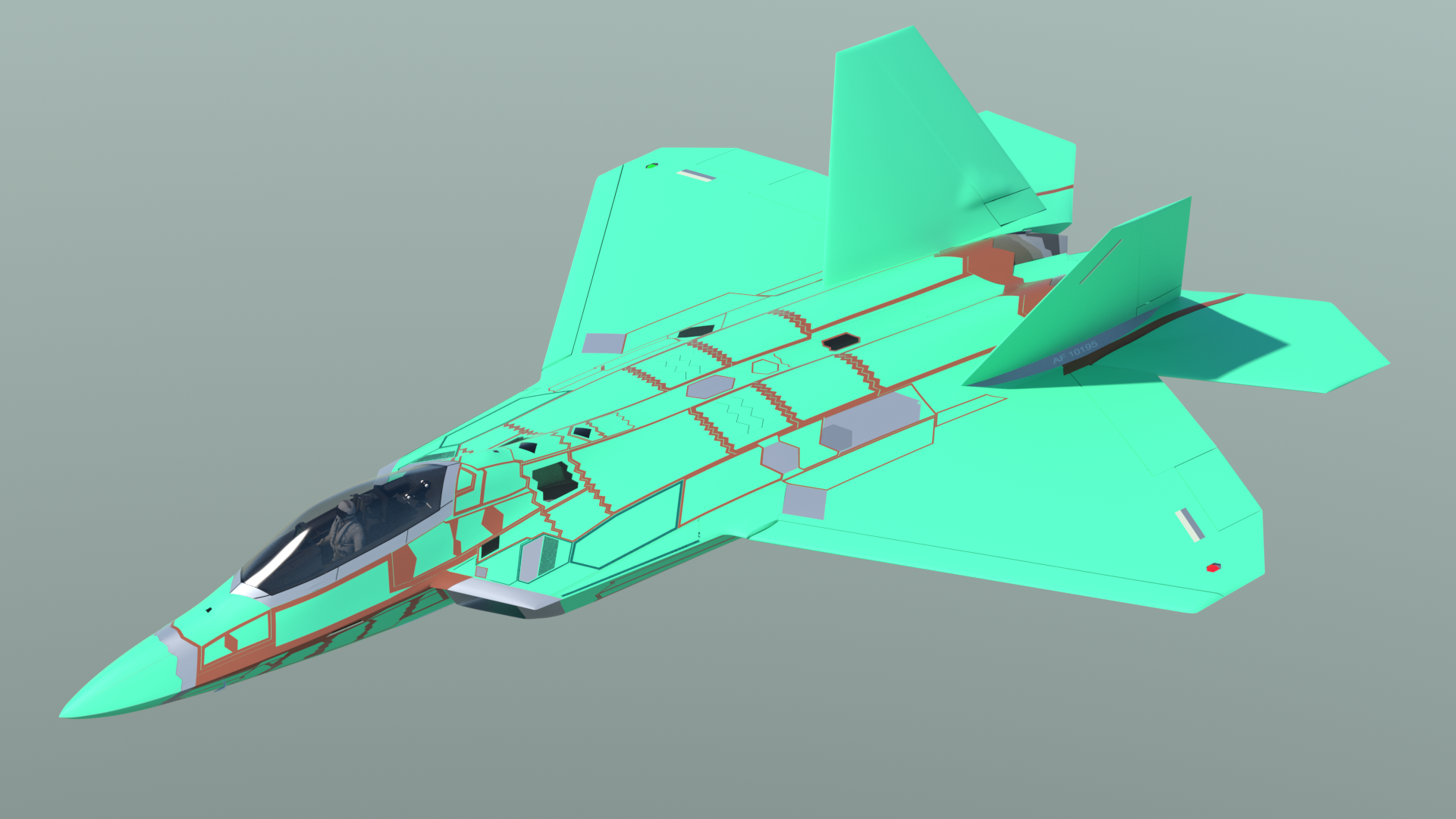 Click here to view a video on the current state of the model, including it's rigging, and how I've setup the start of the interior structures.

As I mentioned above, it's nice to be able to experiment with realistic renders during the build process. Here are a few. 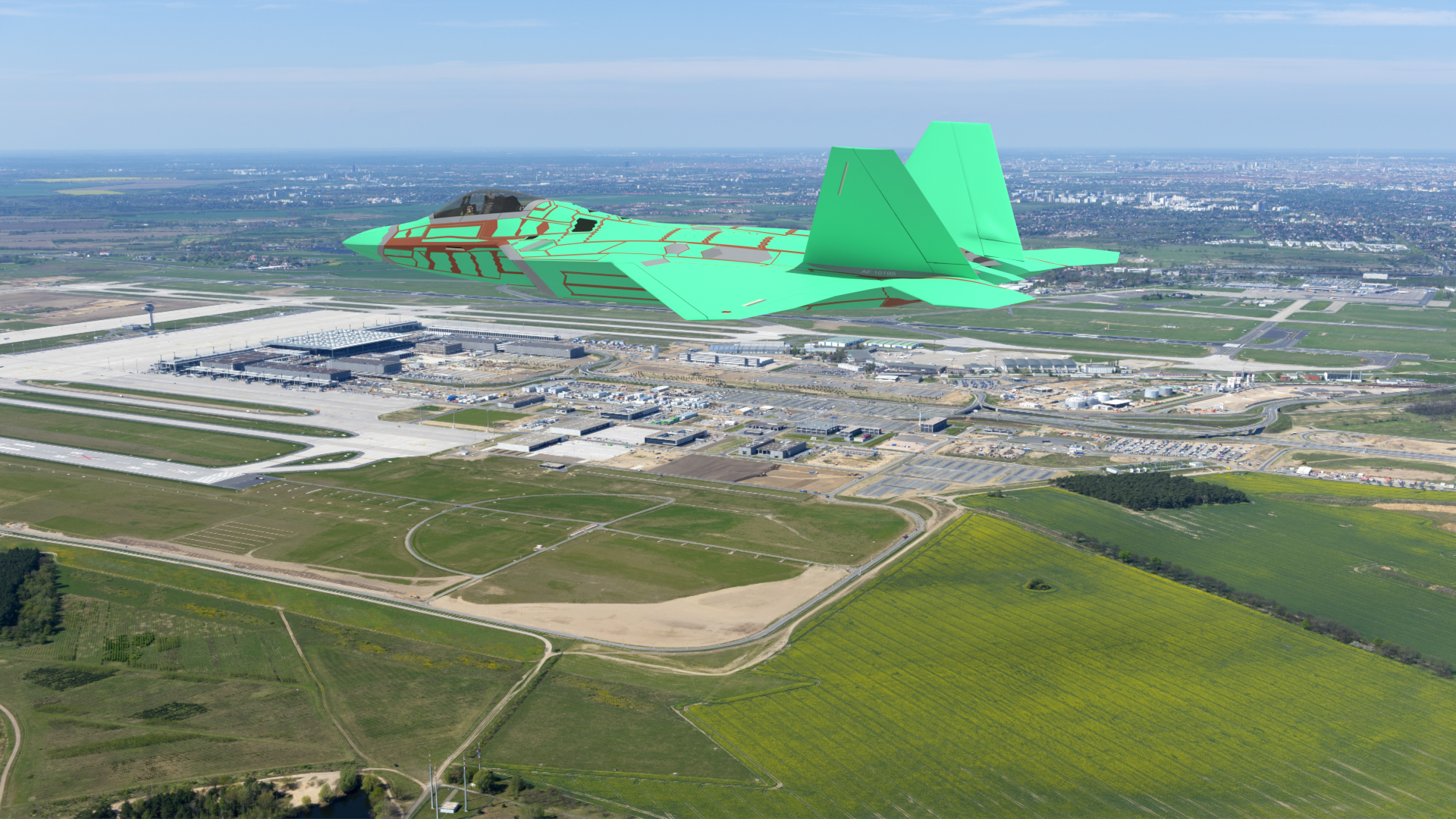 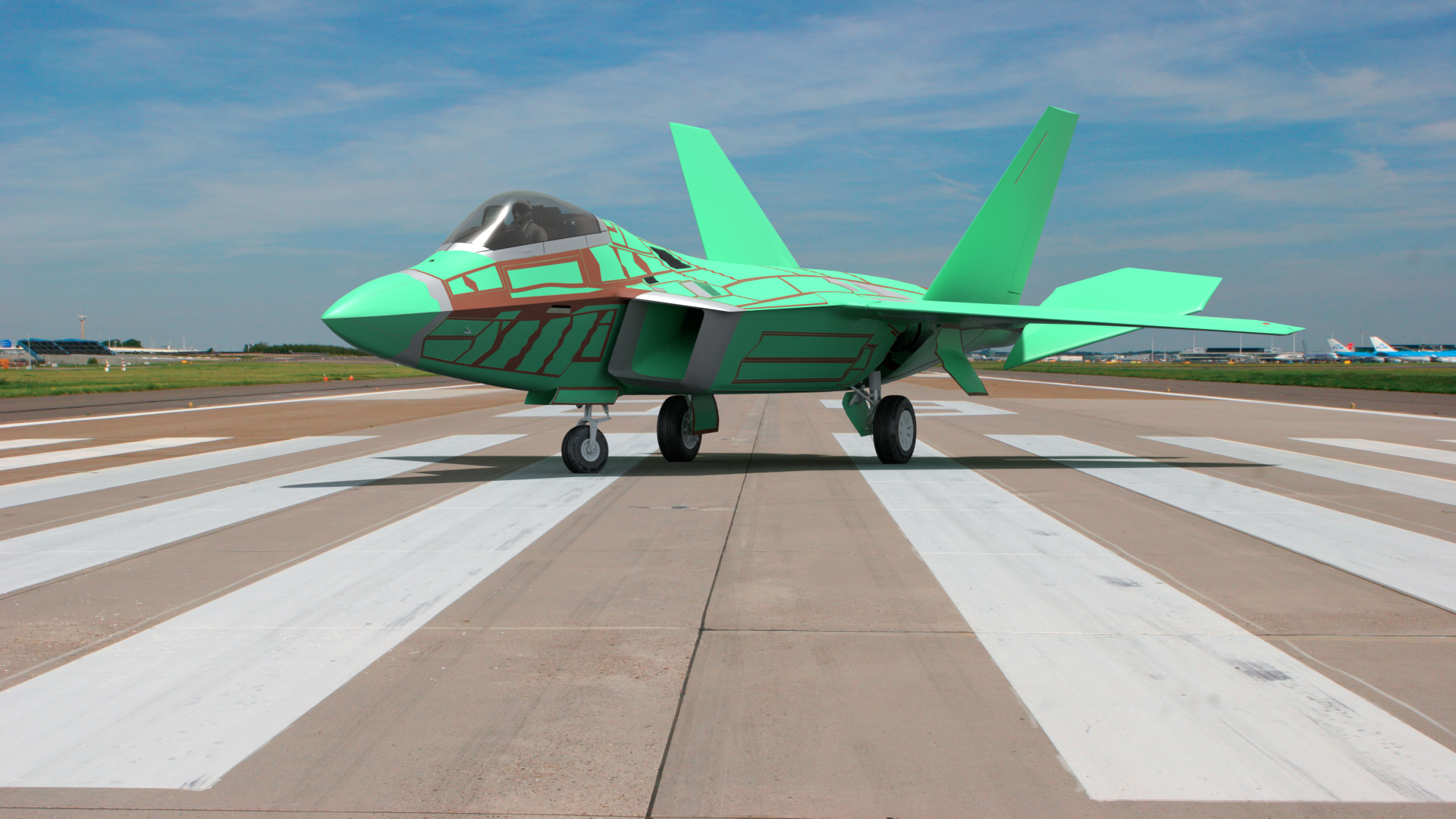 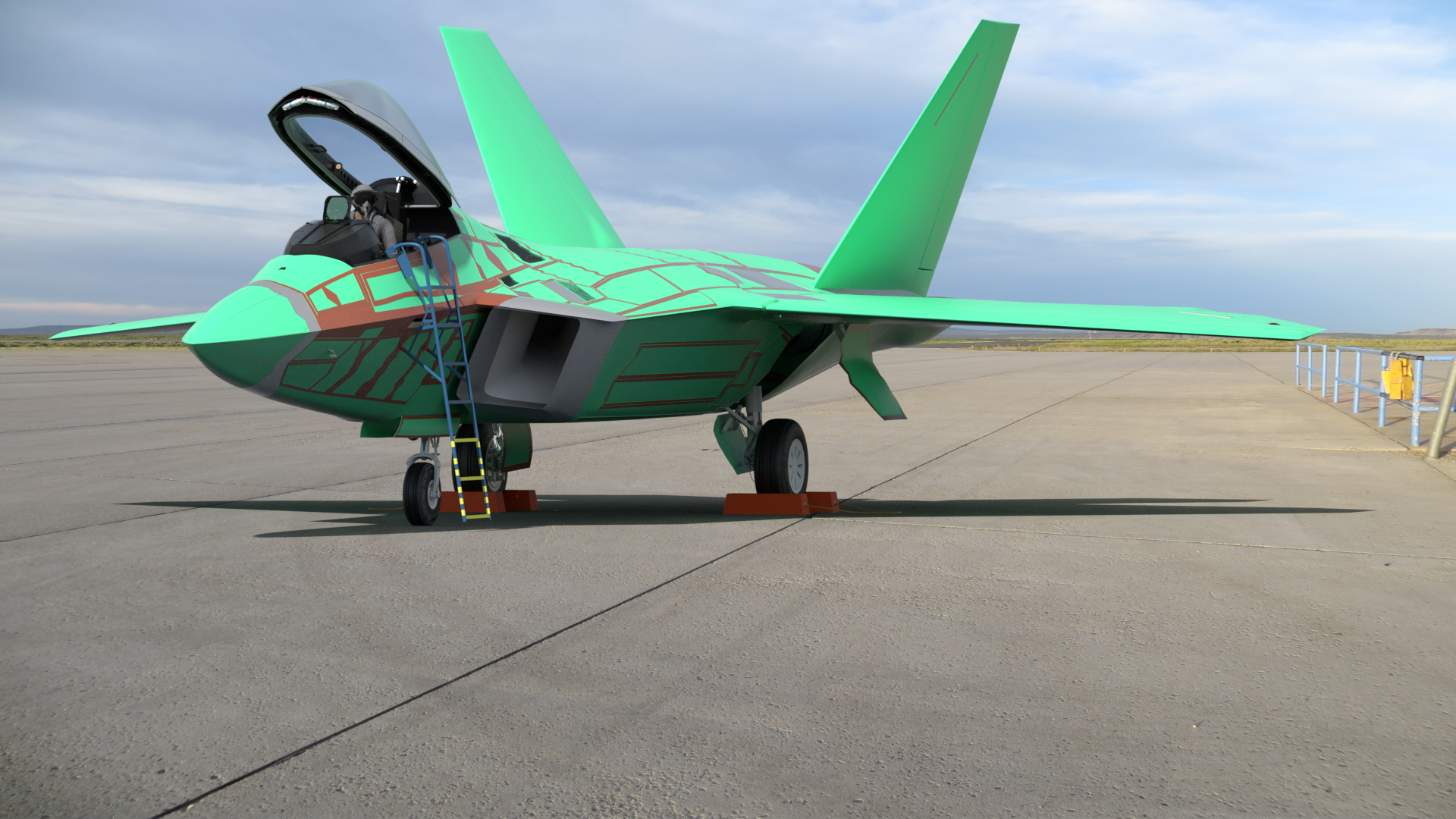 I've done some work on the ejection sequence for the Raptor. Everything is working, but I have some timing issues to work on, as the project moves forward. Here's my first (5-second) animation test. 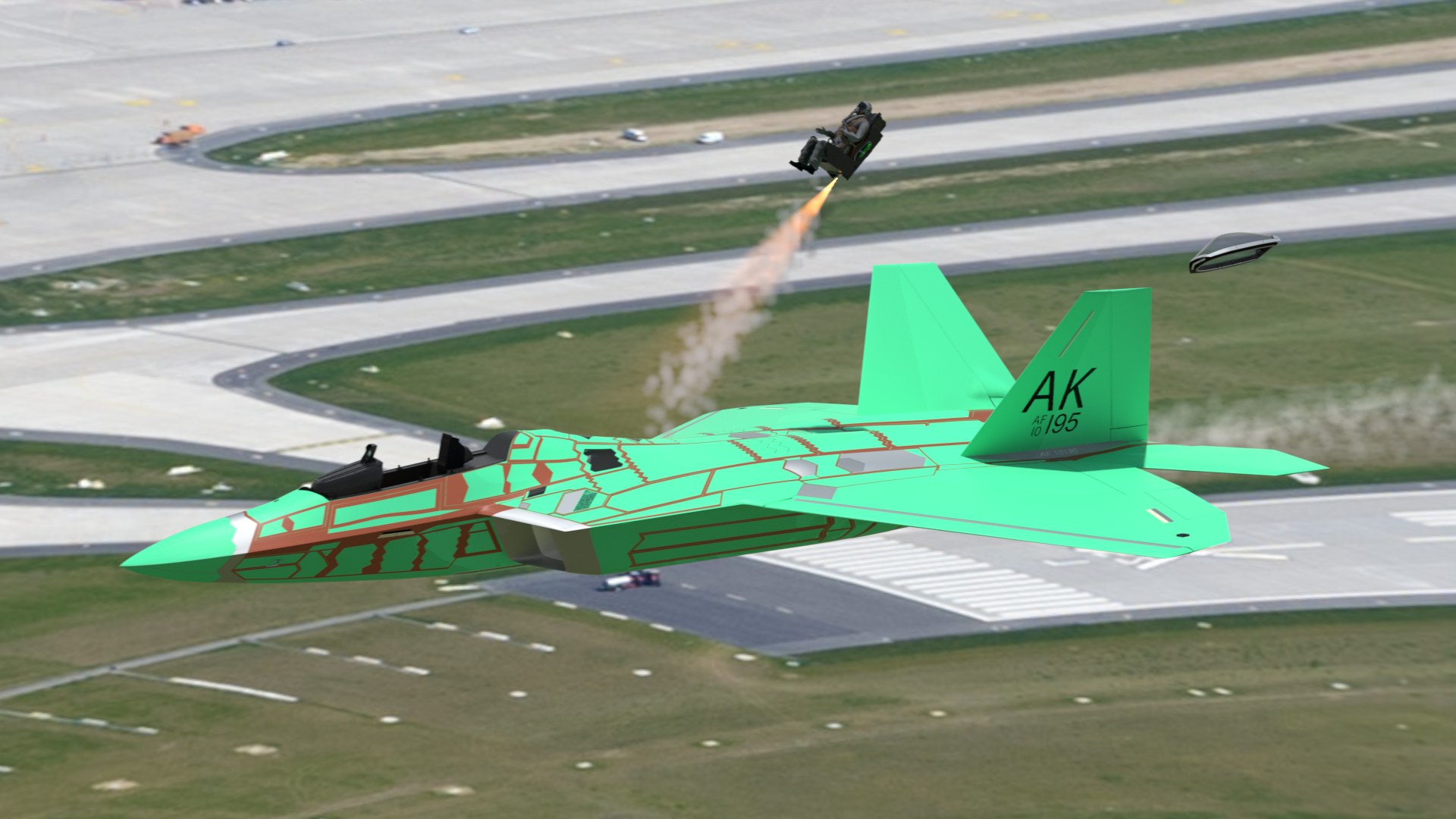 Summary of what's been done so far:

This 2015 version of the F-22 "Raptor" has now been modeled to the stage that I feel confident to move on to the internal structures. Briefly...


New features in the rig setup!

Below - Thanks to lessons learned from the updated version of Rich Hurrey's "Rigging Master Course" for MODO, I'm now adding the kind of rigging features that will enable the model to stand up in closeups. Here, you can see that deformers are enabled for all of the tires now, providing a small amount of "squash and bulge". The cool thing about the rig is that it works in all modes. On the ground, all of the wheels turn, the nose gear is steerable, and of course, all the landing gear extends and retracts.

Now, the wheel rotation has two new features. When making turns on the ground, one main wheel would normally rotate faster than the other. This works on the model too, even if the model is rotated in such a way that one or more of the wheels rotates backward. The other consideration is what happens off the ground. When the aircraft rotates around the main gear for takeoff, each wheel's rotation (and it's deformers) stops when it lifts off. On landing, the reverse is true. When the gear is first extended in flight, the wheels aren't rotating. But as they touch down, each one begins to spin and deform appropriately, even if one main wheel touches down before the other. (Thank you for the great course, Rich Hurrey!) There will be lots of other cool features like this added to the flight control system, as the project moves forward, and many of these are incorporated into "Modeling with MODO, Volume Seven", which was released in July 1st, 2015. 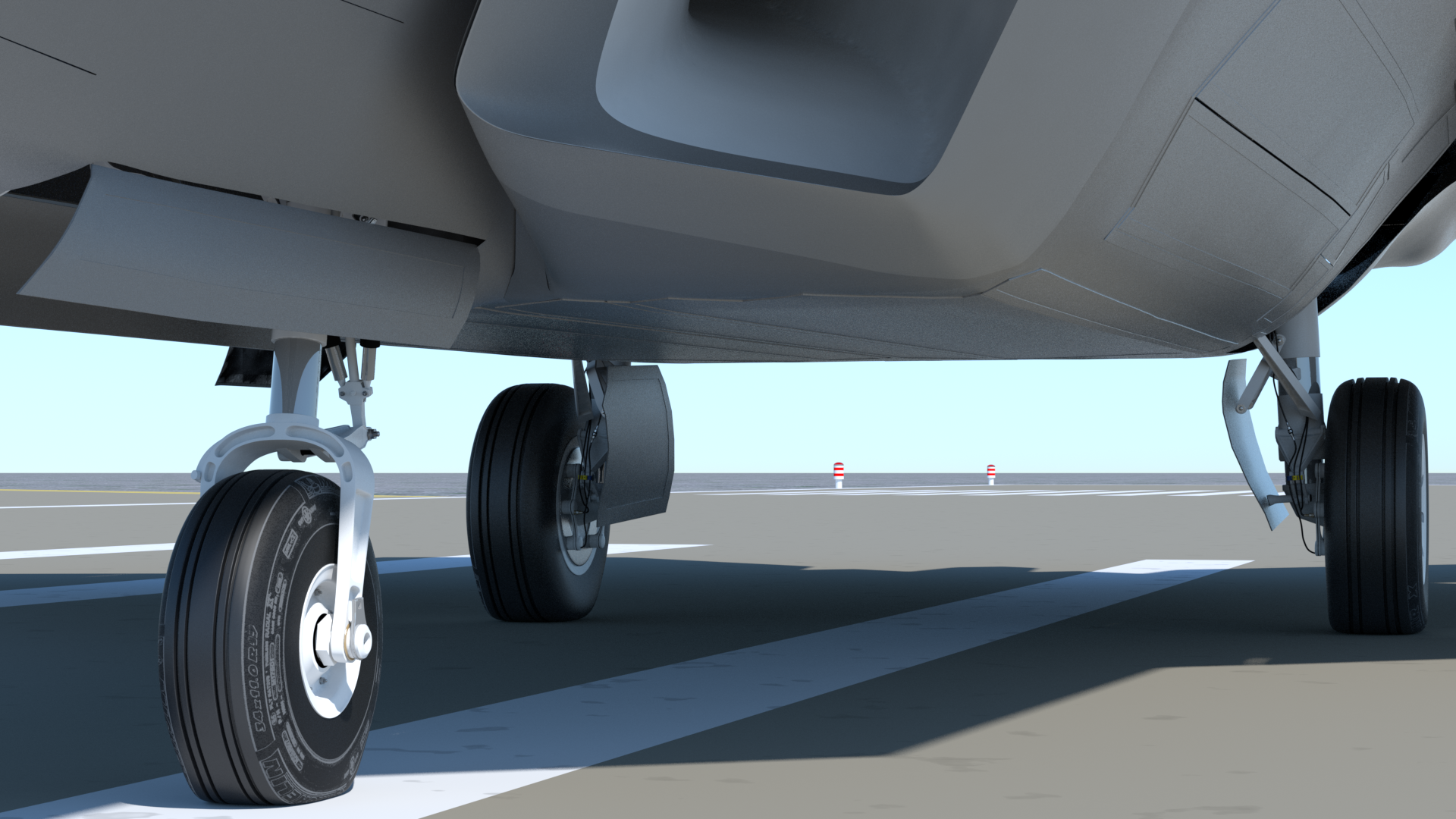 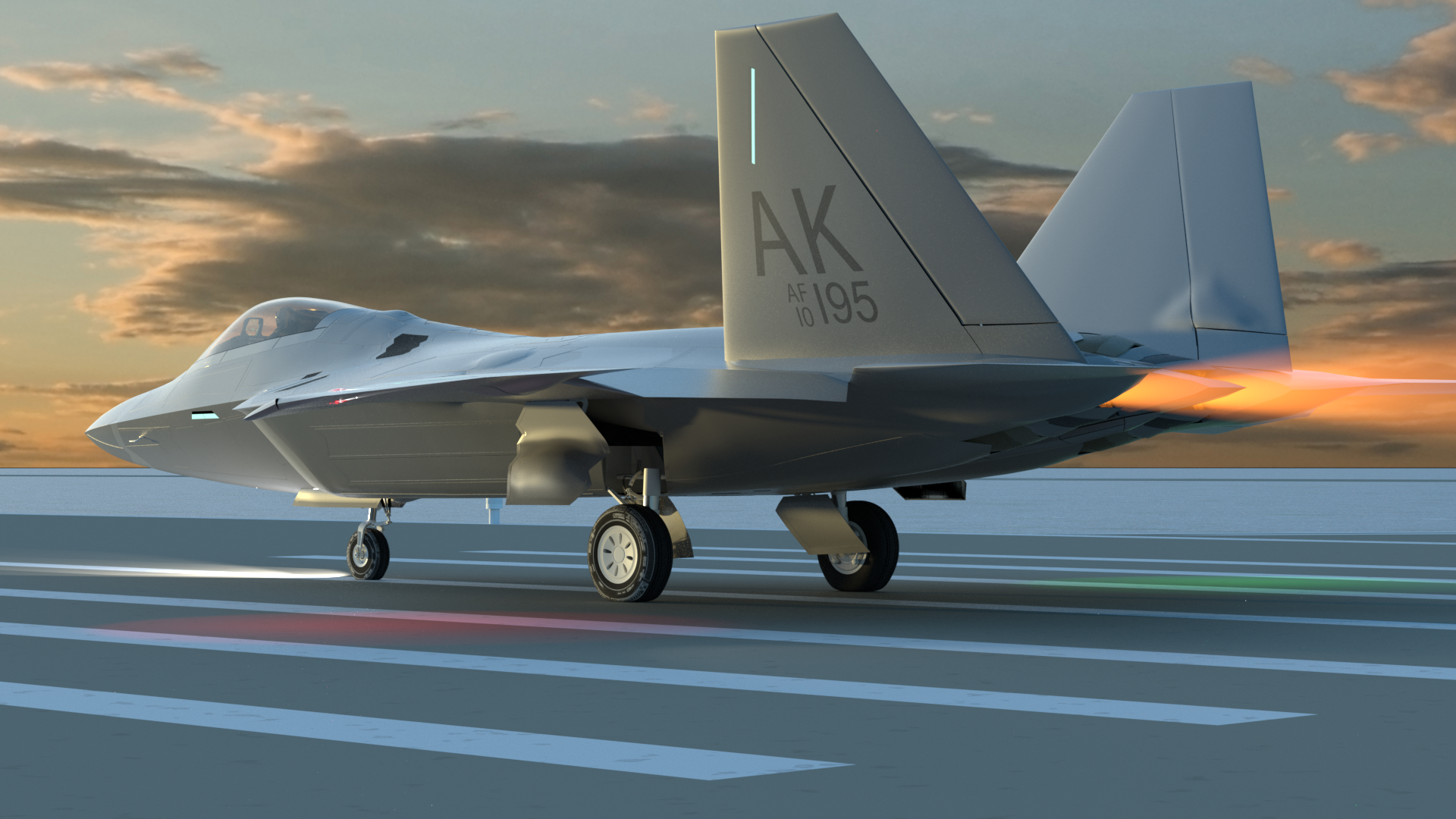 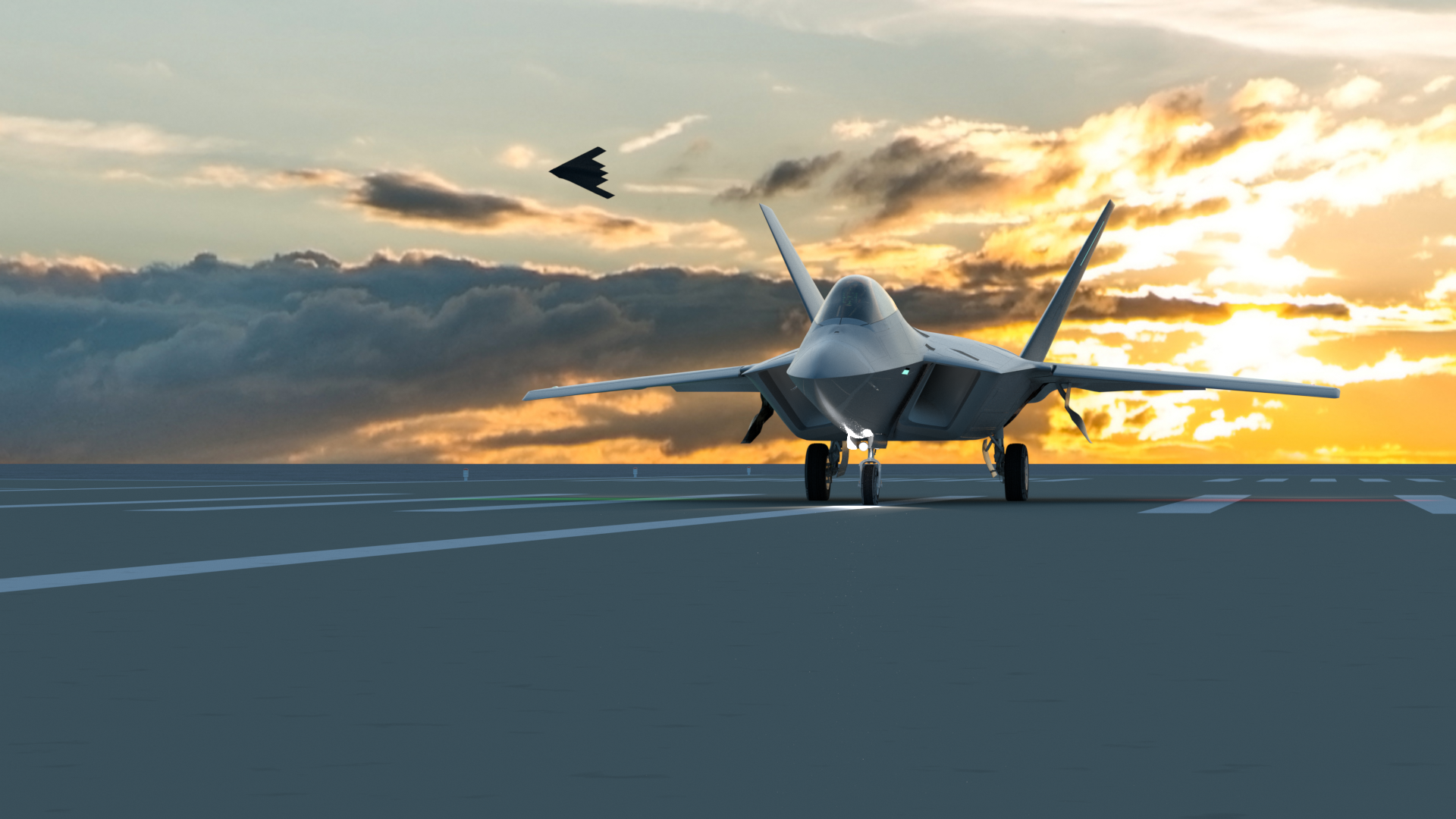 More coming soon, as I get into the interior structures...


A bit of interesting trivia about the rigging... Notice in the turntable above, that the right main wheel is rotating forward, and the left one is rotating rearward, just as it should in this sort of turn. This shows that the "Revolve" modifier is working correctly.

I rigged the flight controls, pilot's head-turning ability, nose wheel steering and retractable landing gear, and various animated doors (like the aerial refueling doors and weapons bay doors) long ago. But along the way, more features have been added to the rigging, for later animation. Some of these are:

In the movie below, I've got the Raptor passing through a variety of speeds, (hence, the jittering) but basically accelerating from 0 to over 1800 knots. All flight control sliders were moved to their extreme positions and simply left there, and the aircraft's speed automatically reduces their maximum deflections as the speed increases.

Creating the interior parts provides many opportunities to paint myself into a corner, modeling-wise. So I'm going slow here, to develop a sensible plan, before actually doing the modeling. However, it won't be long, so check back soon, if you're interested in that process.

It's possible that some additional (small) changes might be made to the exterior geometry during this process. So none of the final markings and texturing will be done until close to the end of the project. For now, I have enough to produce some renders in certain scenarios, while I work on the more important structural things.

Press the "Page 07" link below, to continue.