Further details on this model's construction are included in "Modeling with MODO, Volume three - Jets!". 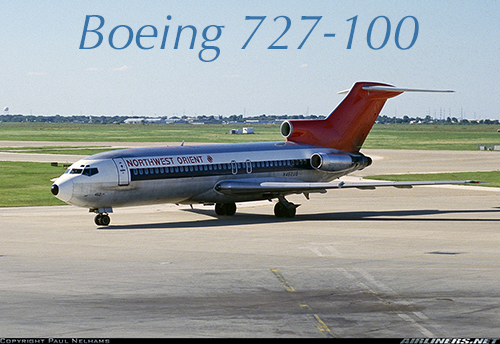 As a young man in the late 1950's, the first commercial airliner I flew on was the Lockheed "Constellation", and the Douglas DC-3. So, in the early 1960's, when the Boeing 727 came along, it was very exciting to be aboard a fast, high-flying jet. I spent many hours on 727's, mostly on shuttle-length flights, like Dayton to Chicago. Due to the relatively-small size of jet engines in those days, the aircraft had a distinctive high-pitched "metallic" sound, and has a special place in my memory. It was fun to be passenger in these.

I've decided to model the 727-100, which is the first (smallest) 727 that Boeing produced, and therefore is a historic aircraft.

This project also fits in well for my plans for my next tutorial, "Modeling with MODO, Volume Three - Jets!" which will focus on modeling various jet aircraft, so I was happy to find some good documentation. This model is available, fully rigged for animation, in my 3D Catalog.

After searching the net for a while, I've collected some drawings, ( http://www.aerospaceprojectsreview.com/catalog/drawndoc.htm ) and have broken it down into parts, for MODO. These are drawings for a 1/40th scale display model, not the actual aircraft. But, they were done by Boeing engineers, and went through various revisions to improve accuracy, and are probably the best documentation available today, since Boeing rarely distributes accurate drawings of their aircraft. Combined with photos, I have some great information to build the 3D model. Since this model's construction will be covered in much more detail in the set, I'll keep the article here in more of an outline form, showing the major steps.

Once the documentation was sliced up for use in MODO, these first steps went quickly. The aircraft is entirely sub-d at this time, which lets me make changes in the overall shape easily. The work you see on this page was done in just a few days. 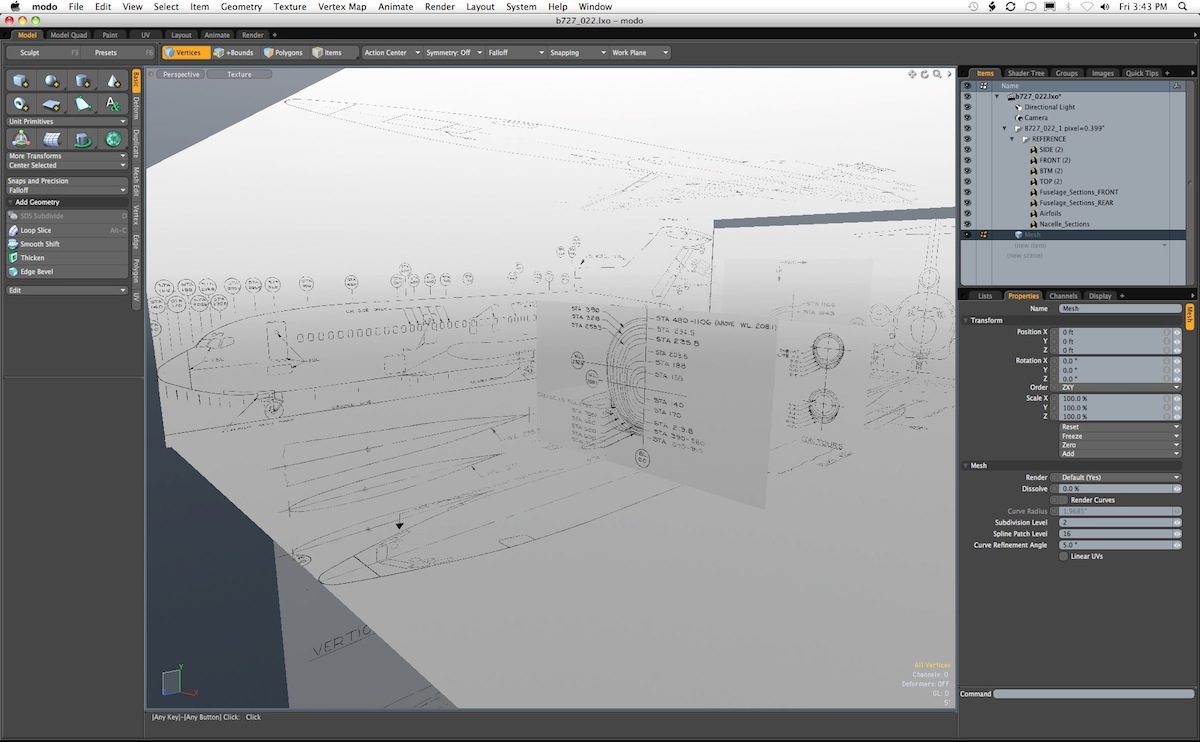 Like many aircraft drawings, these show the aircraft in it's "cruise angle" configuration, which is easier to model in 3D, since more of the angles are horizontal and vertical. The aircraft's "squat angle" on the ground is actually slightly nose-down, so that's why you see the nose wheel slightly off the ground in these views. At the end of the project, I'll pose it realistically. 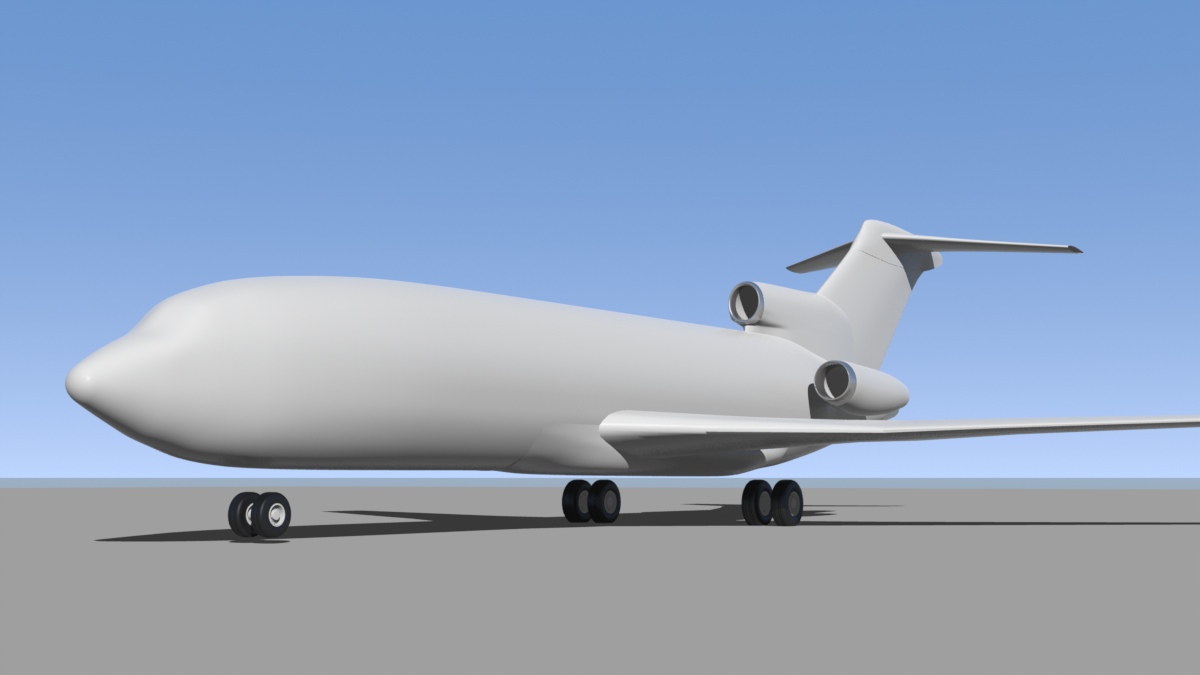 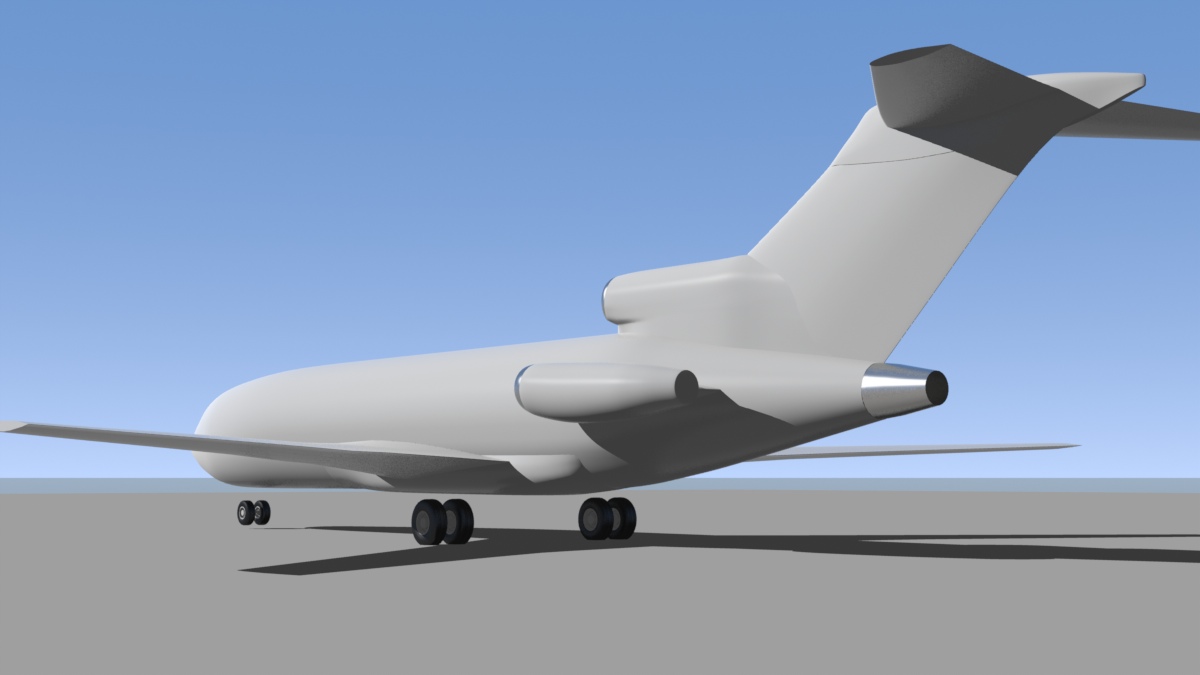 I have a system for using boolean operations in MODO that's been working well, so I plan to use it here too. These images show the boolean cutters I've created, to make most of the major openings in the fuselage. Once I'm happy with the exterior shape, I'll freeze the geometry.

Look carefully at the (green) cutters for the cabin windows, and you'll see that there are windows at the rear of the aircraft, right next to the engines. When I was a young man, I used to think it was exciting to sit there. Noisy, but interesting.

For those of you who notice the little things...
I'm aware that there's no cabin door on the starboard side of a 727-100. It was placed there so that later, I could stretch the model into the 727-200, which does have that door. So although you'll see it in some of the renders here, I've removed it in the final model. 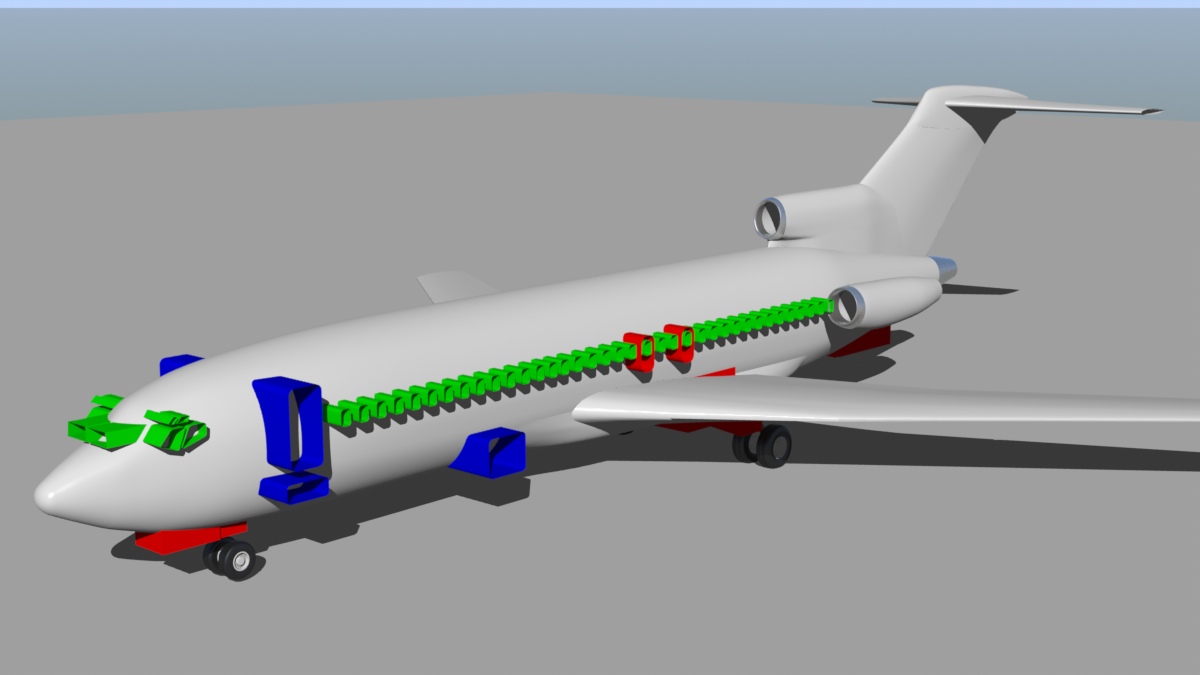 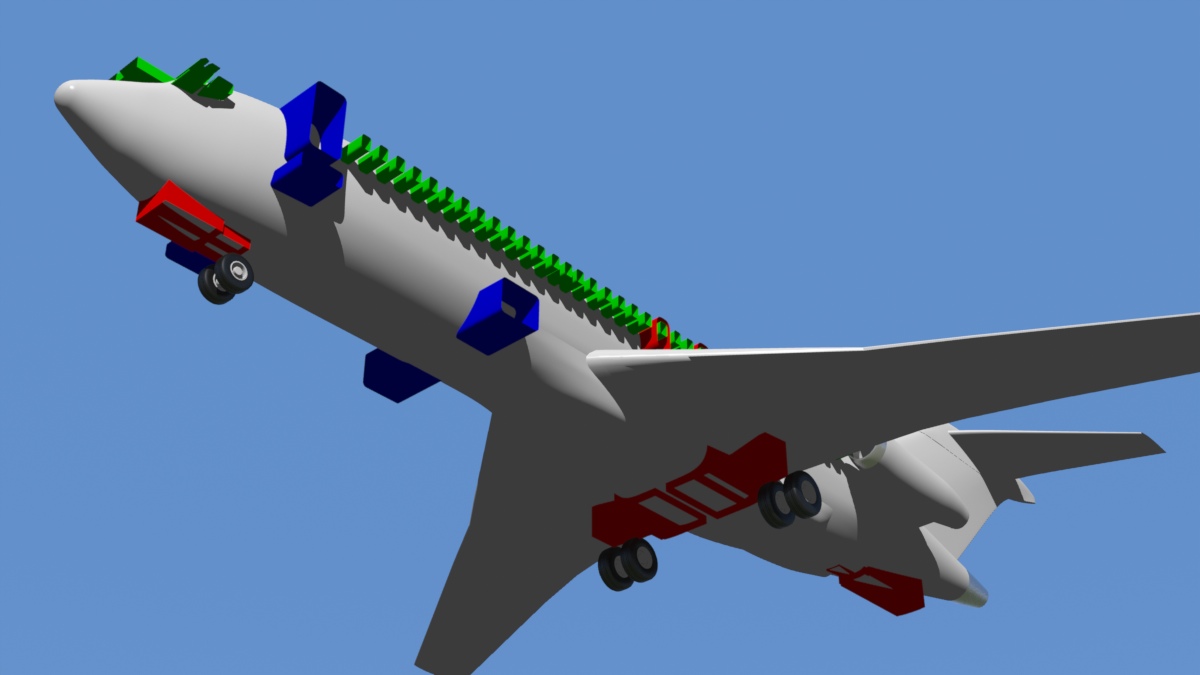 Unlike modern airliners like the Boeing 787, which have curved cockpit windows. the 727 has flat windows. So, I cut the surrounding area out of the now-frozen-geometry fuselage, then built the windows and window frames in place, and finally, connected all the edges. 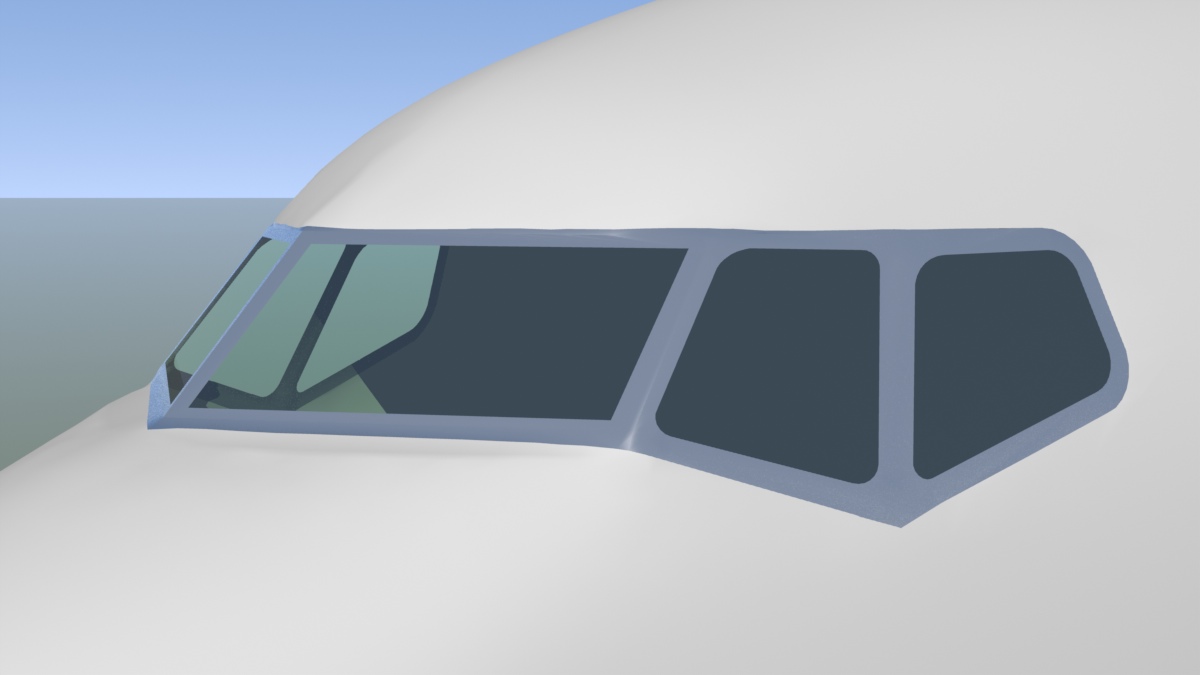 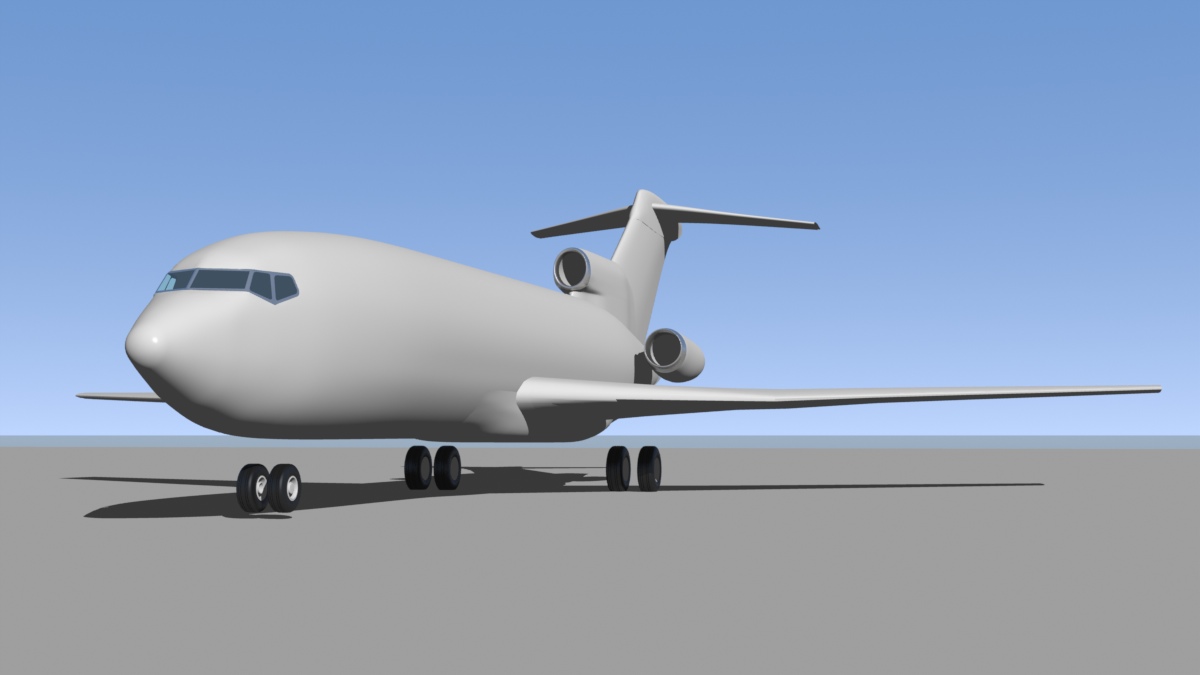