Since 1995, I've produced 3D models, images, and animations of real-world or conceptual designs for customers. Typical deliverables are:

I'm always seeking new projects, so if you have one in mind, please contact me. See my Cost Estimates page for general information on pricing.

I'm also an avid photographer, and welcome opportunities to photograph aircraft, people, places, and events, especially those that are aviation/aerospace related. (See my photo gallery in the menu above.) So, if you have a subject or event you would like to have professionally photographed, I welcome the opportunity! Feel free to email me (mikejames@mikejamesmedia.com).

I'm a a lifelong aviation/aerospace fan, private pilot, skydiver, photographer, and spent most of my working life as a musician. (Drummer/Arranger) In the late 1970s, while still on the road as a musician, I began studying computer programming. and ultimately wrote and sold a program called "Terrain 3D" to Digital Precision Ltd., England. If you want to see some truly ancient history, showing my beginnings in 3D in 1983, check out my 3D Origins page.

In 1994, I quit programming and became strictly a software user. During the next 10 years, while studying 3D modeling and web site design, I created various RC aircraft and UAVs, designed in 3D, created the physical plugs and molds, and did the assembly and flight testing. I still maintain an archive site including those articles, at NextCraft.com. In 2005, I got out of fabrication entirely, and since then, have worked as a freelance 3D designer and modeler. 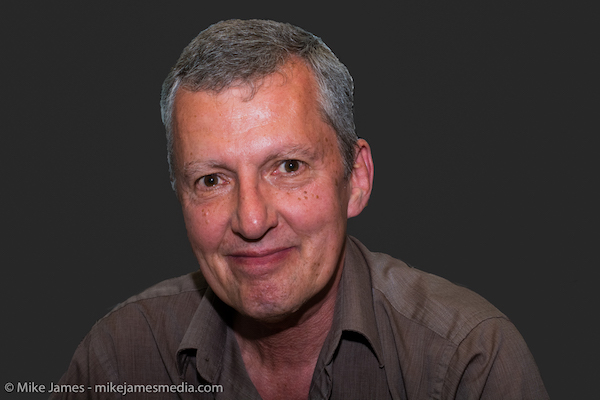 I've lived here in Anchorage, Alaska since 1995, and couldn't be happier. It gives me great pleasure to have access to such a vast wilderness, surrounded by wildlife, clean air and water, and my closest friends. If you haven't visited this part of the world, you really must check it out at some point. In 1995, my intention was to visit for 3 weeks, and I'm still here, loving the people, backpacking and camping, and a rich and diverse artistic community.

Anchorage is thrilling for an aviation fan, too. We have Ted Stevens International Airport, which is one of the largest cargo hubs on the planet, Merrill Field, with more general aviation planes than you'll find in most places, Lake Hood, the world's busiest floatplane/skiplane base, and of course, Elmendorf Air Force base, home to the "Arctic Warriors", a huge cargo operation, and two squadrons of F-22s. All these things keep me motivated as a photographer too, which has been an interest of mine since the early 1970s. Click here to view my current photo gallery.

Today, I do a huge variety of 3D work, including images and animation related to both real-world and conceptual vehicles, organic visualization for artists and their installations, product design and rendering for advertising, prototype products for visualization, advertising and 3D printing, (rapid prototyping) and tutorials for 3D modelers, which you'll find on my Products page. Because I have no secrets about my methods, and enjoy sharing information with others, you'll note that this site is laid out in an information-sharing format, with "follow-along" articles aimed at those interested in 3D modeling, rather than the usual sort of "portfolio" style.

Thank you for visiting!
- Mike James -

3D-related Customers and Projects not under NDA: