My history with the Piaggio "Avanti" P180

If you look around this site, it's obvious that I'm an avid aviation fan. (Pilot, Skydiver, RC model/UAV designer, and 3D modeler) One of the projects that's occupied quite a bit of my time over the years is this brilliant and gorgeous Italian design by Piaggio, the "Avanti" P180. (Most recent 3D model article is here.) In about 1995, I was researching an adaptation of Burt Rutan's "Long EZ" design, called the "Berkut", and came across an article in Flying Magazine on the Piaggio P180. After reading the description of it's design parameters, I was immediately impressed, and wanted to know more. I already had a knowledge of radio-controlled models, and knew how to make plugs and molds, so I decided to make a 1/6th scale, flying model of the plane. This was during the early days of the internet, and neither the net or our existing computers were much help, research-wise. So when I decided to find out more, it meant a combination of writing letters, making phone calls, and exchanging information via FAX. The time period made this an advantage actually, as you'll see... 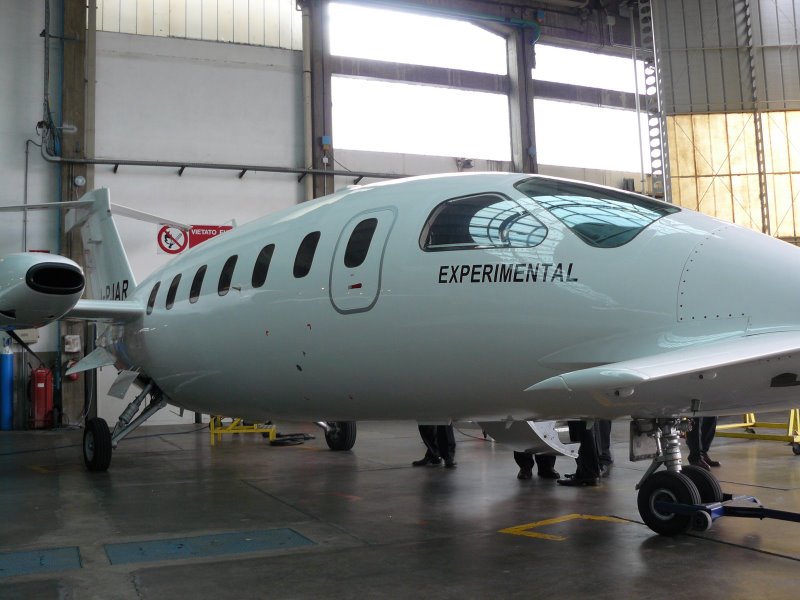 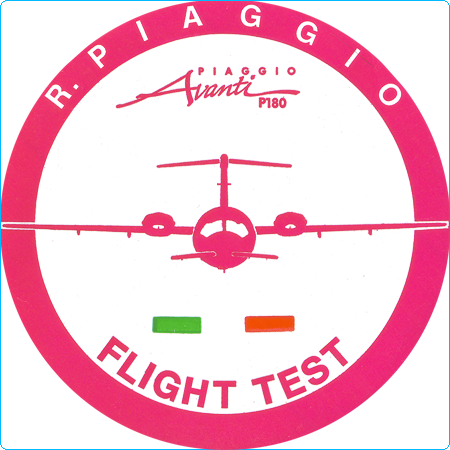 The aircraft pictured above is the original version, and you may notice that the windscreen window arrangement is different than it is today, with the production "Avanti" and "Avanti II".

Two things helped greatly in my efforts to document the plane. This was before the time when terrorism was such a high concern, and also, Piaggio was (and is) a very cordial company. I was introduced, via mail and FAX, to Mr. Livio Cavini and Mr. Paolo Chiarlone, two Piaggio engineers living in Genova, italy, who worked on the P180 project, and they were quite generous and enthusiastic about helping me obtain what I needed. Our communication went on for over a year, while I asked questions, and they responded with excerpts from the maintenance manual, engineering drawings, etc.. They were working on their own (1/7th scale) RC model of the P180 to fly, so we traded a lot of technical data on airfoils, etc.. There is an issue of trust... I promised not to redistribute the documents they sent me, and have stuck to that promise.

The more this went on, the more I realized the depth and brilliance of thought that had gone into the design, and it's longevity proves this is true. The Avanti II is the fastest turboprop aircraft on the planet, is extremely low-drag, and is hugely-economical, compared to a jet, although it's performance is nearly as good. (402 knots at 31,000 feet)

Mr. Cavini and Mr. Chiarlone built this model from wind tunnel drawings of the actual aircraft, both as a follow-up engineering test, and for the obvious fun. The photos below were originally film snapshots, and I've scanned them to appear here.

I was doing the math for my 1/6th model, while communicating with Mr. Cavini and Mr. Chiarlone, about their 1/7th scale model. We all felt that a 1/7th scale model would be a marginal flyer, because of that math. The plane was built lightly, but at that scale, there simply isn't much wing area, and the wings aren't as efficient as even slightly larger ones, due to the Reynolds effects. Basically... Air molecules don't scale down, so a small wing simply cannot be as efficient as a larger one. With typical model speeds and weights, that means that a flying surface with a chord (width) lower than about 5 inches loses a lot of performance. (That's why I chose 1/6th scale.) This was proved later... 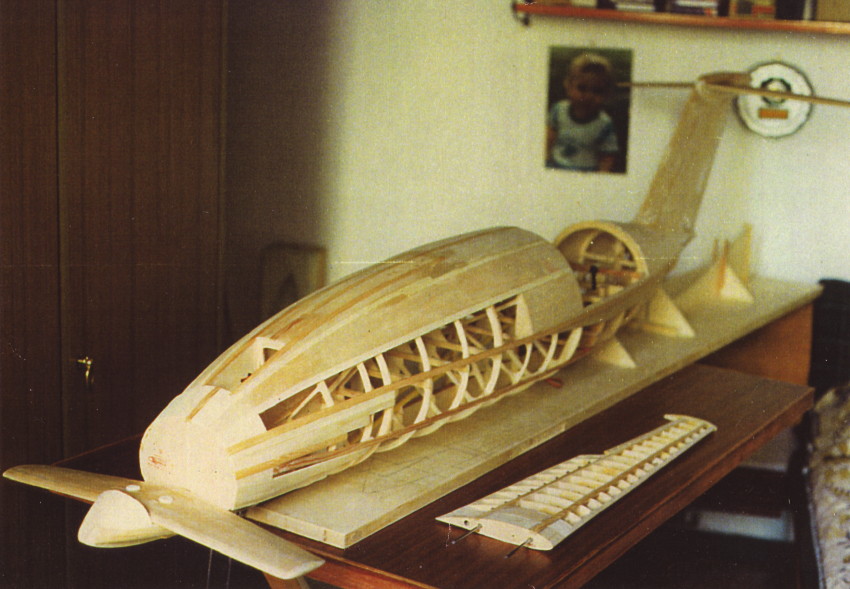 Using traditional balsa/plywood modeling techniques, the model was meticulously-built in a jig to keep it aligned.
You can also see the inboard and outboard wing sections, alongside the fuselage. 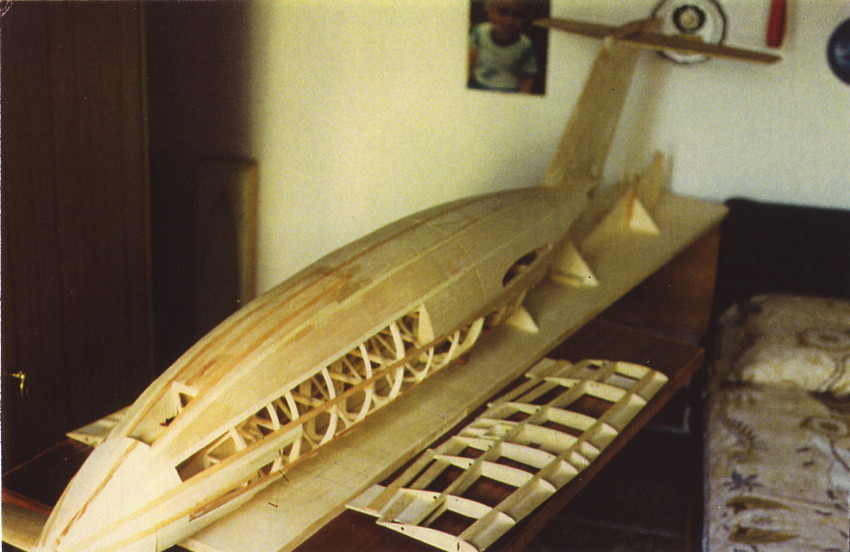 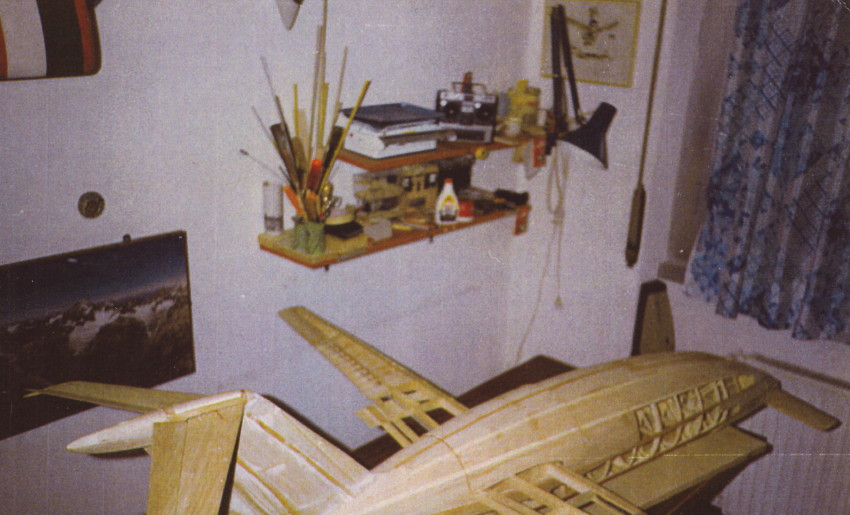 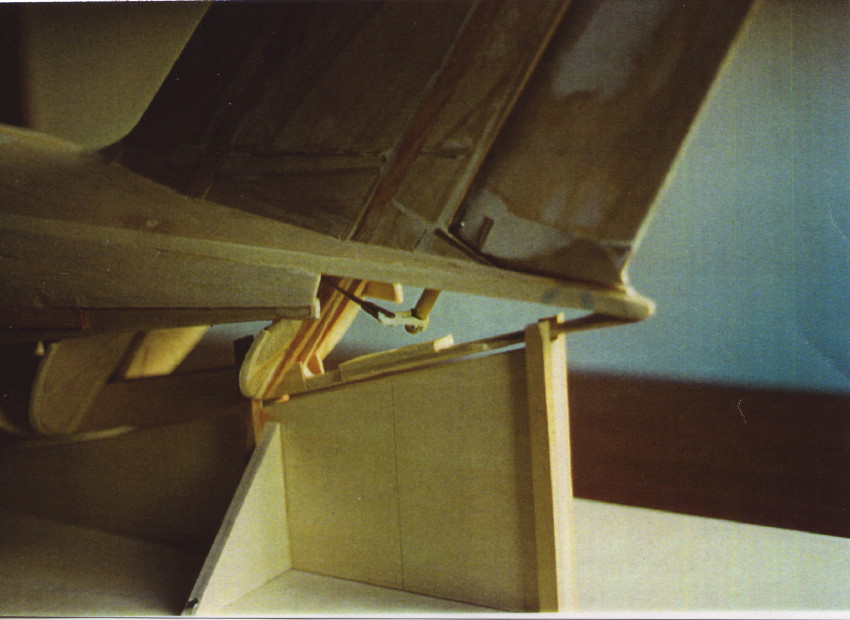 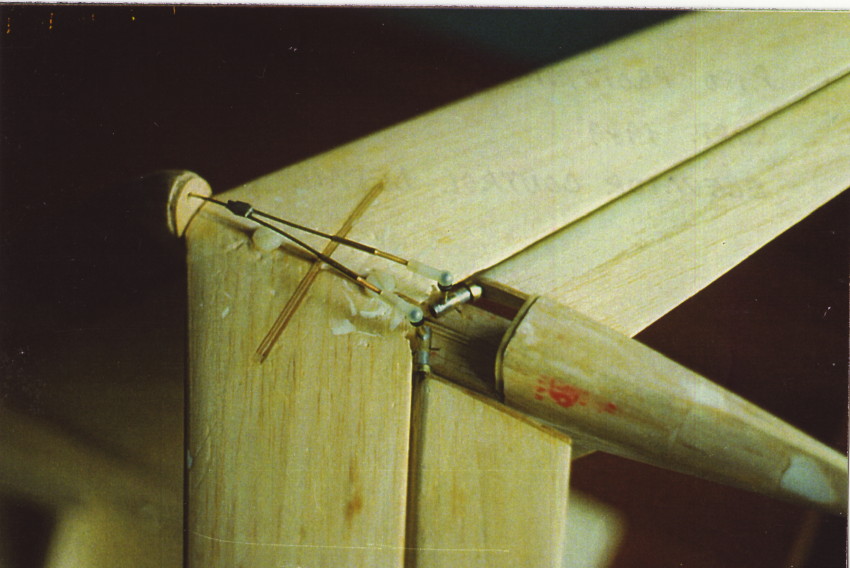 The rudder connection can be seen here. 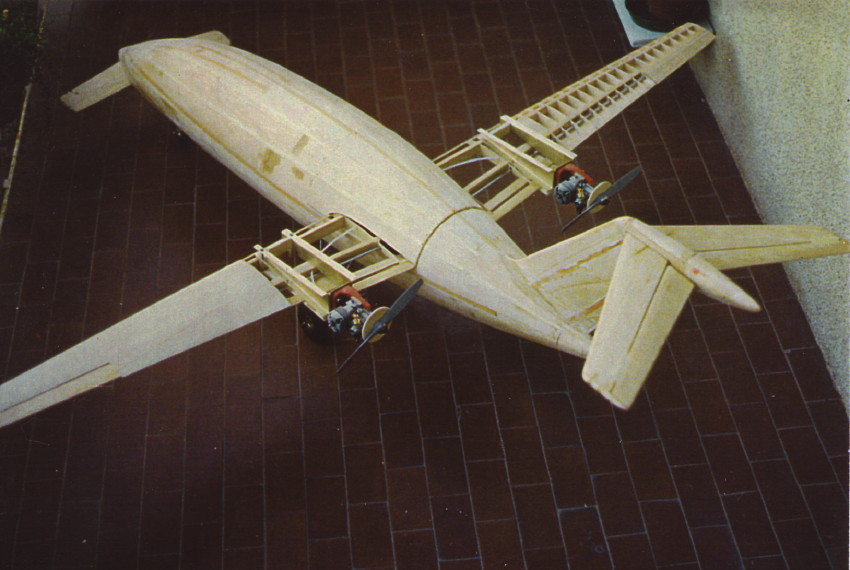 The horizontal stabilizer, with it's control connection for the elevators

These structures are well thought-out, and precisely-done. Flaps and ailerons are controlled by torque tubes, with the servos toward the root of the wing, which is not only elegant, but required, because the wings are too small and thin to contain them elsewhere. 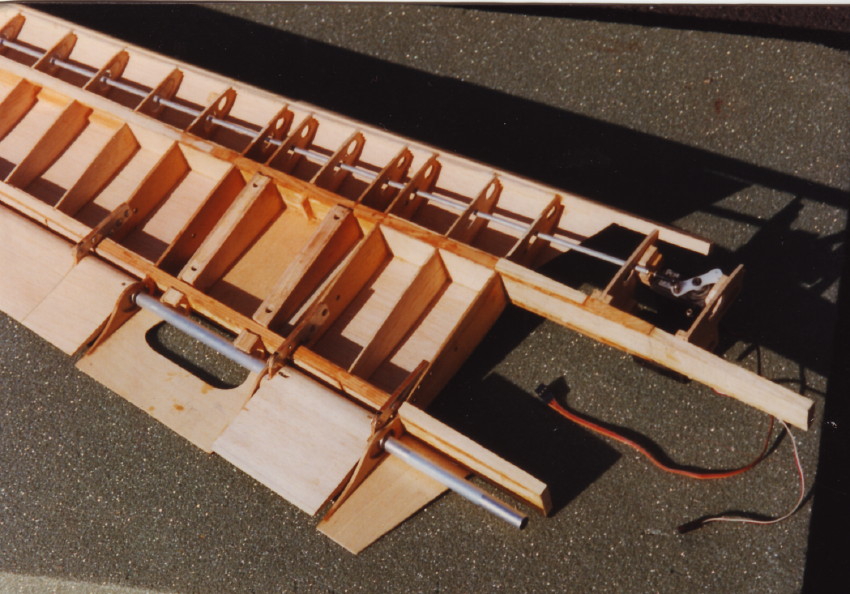 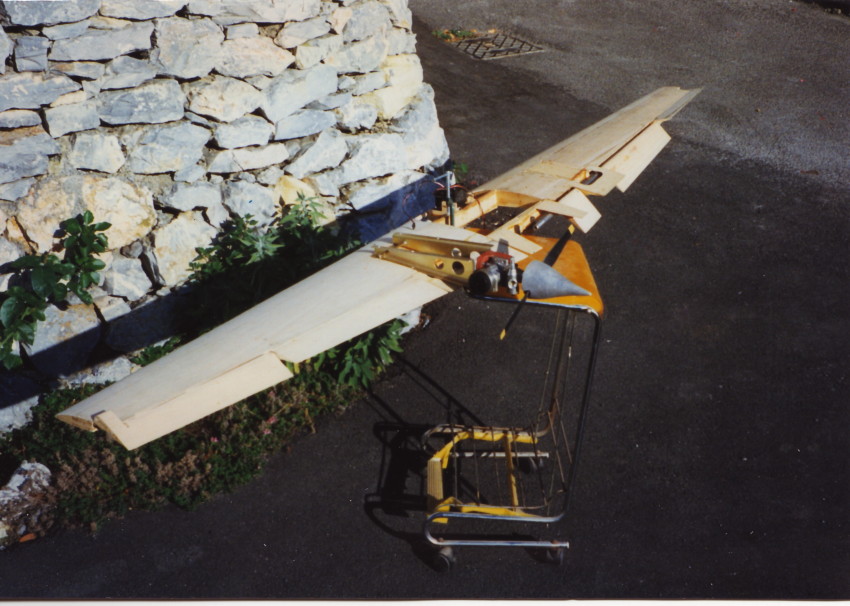 Custom propeller spinners were machined to match the unique look of the ones on the actual aircraft. The engine mounts were changed from wood to aluminum, for better structural integrity. 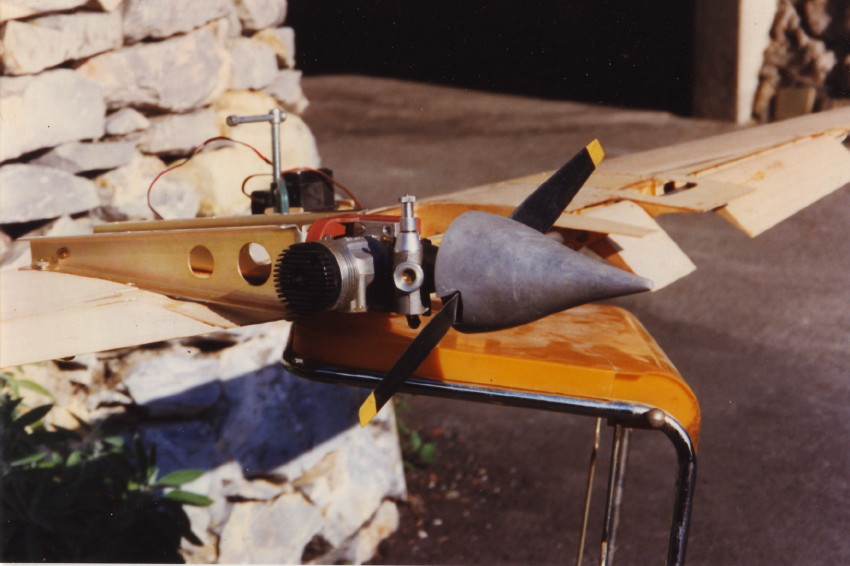 Like the actual aircraft, all the major components meet in the rear part of the fuselage. So, a hatch was provided, which gives access to the radio controls inside, as well as the location of the removable wing's mounting system. They chose not to include retractable landing gear on this first model, until any flying problems were worked out. 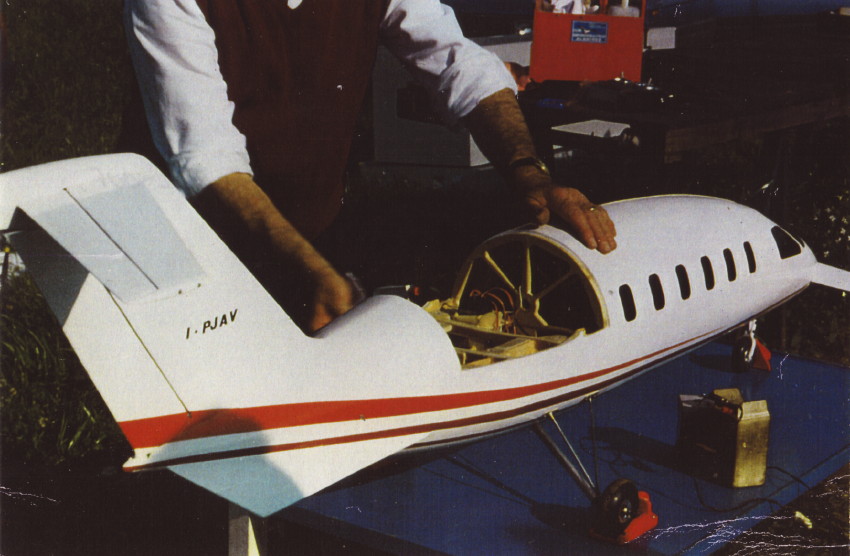 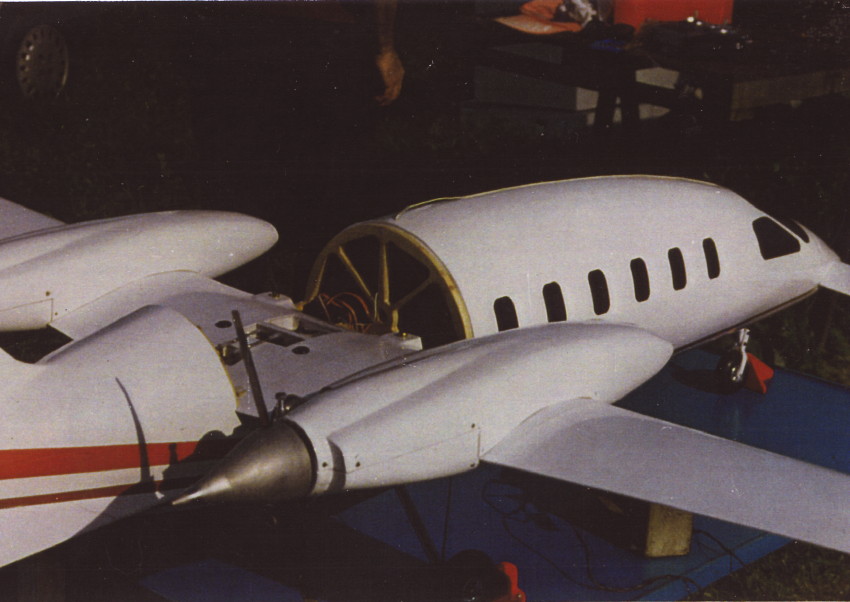 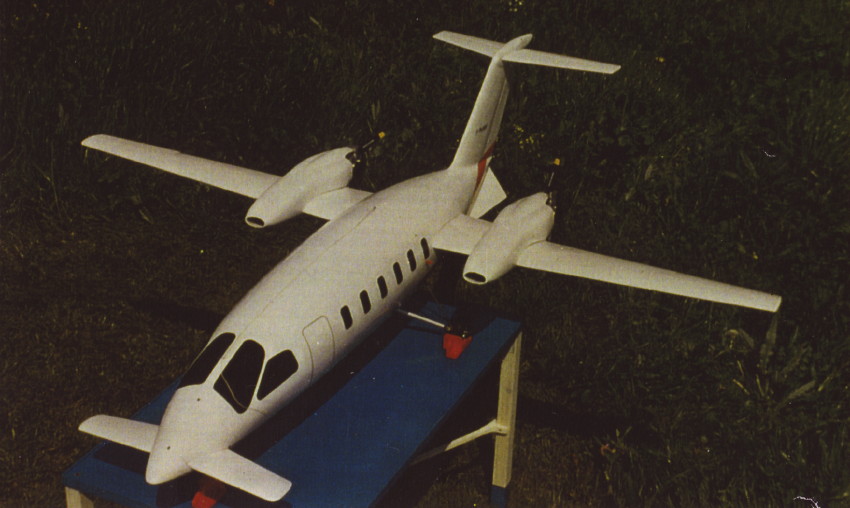 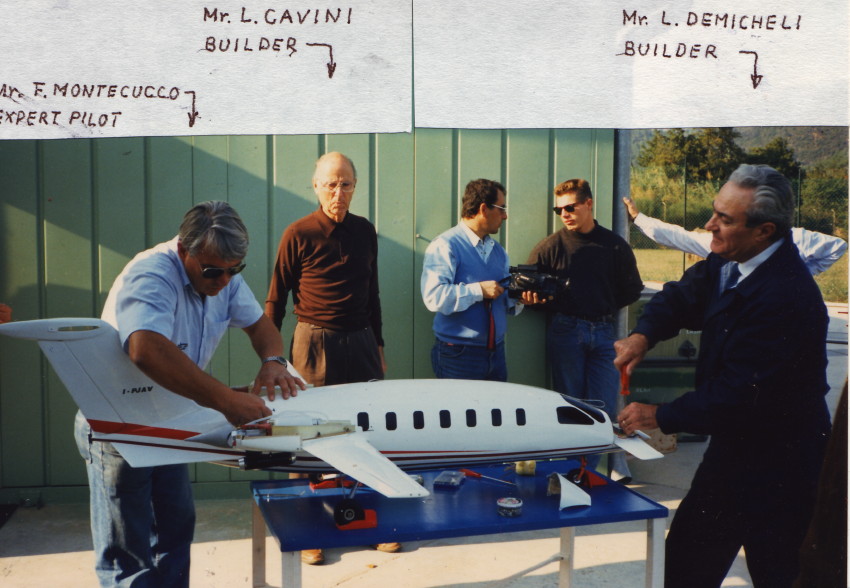 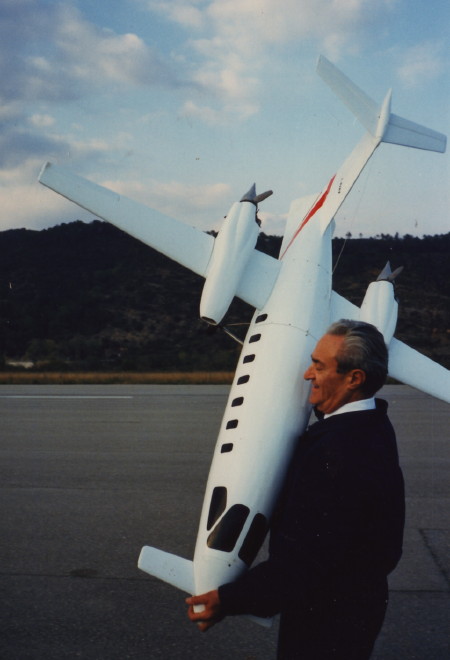 After engine throttle and other control system tests, along with several taxi tests, the model was ready for flight. 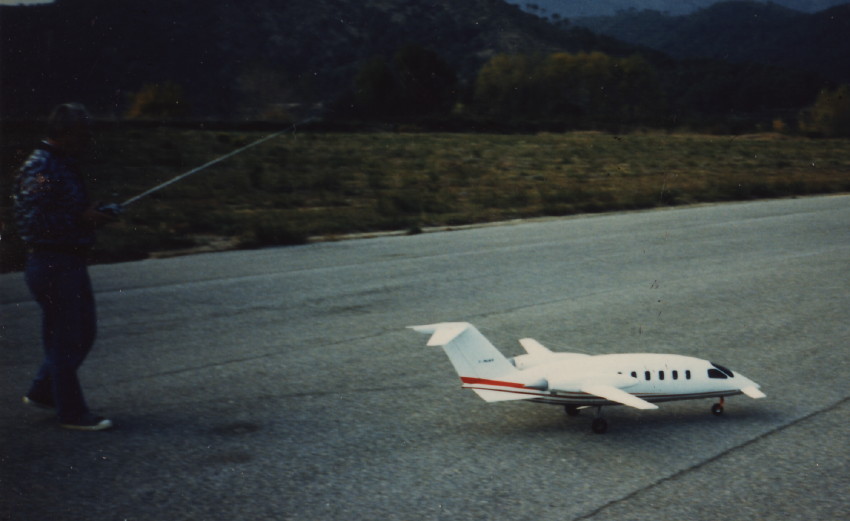 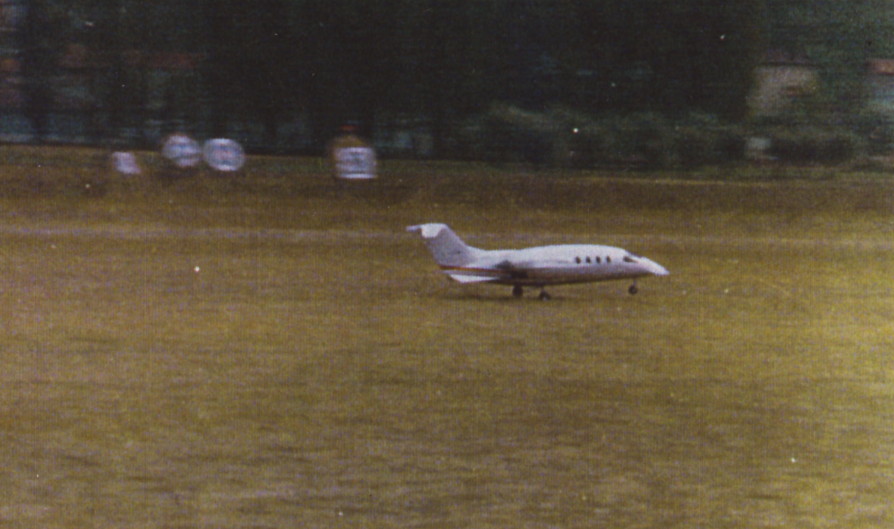 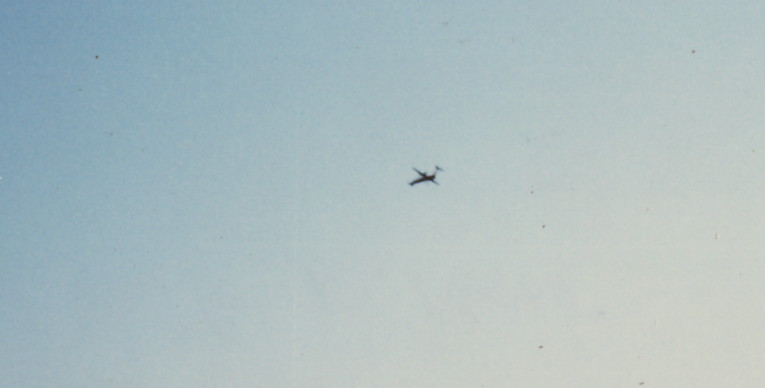 Unfortunately, this beautiful model was lost on the first flight. One engine overheated, causing it to run lean and quit. The power of one engine was not enough to maintain control at landing speeds, and crashed before it could be landed. We were all saddened by that.